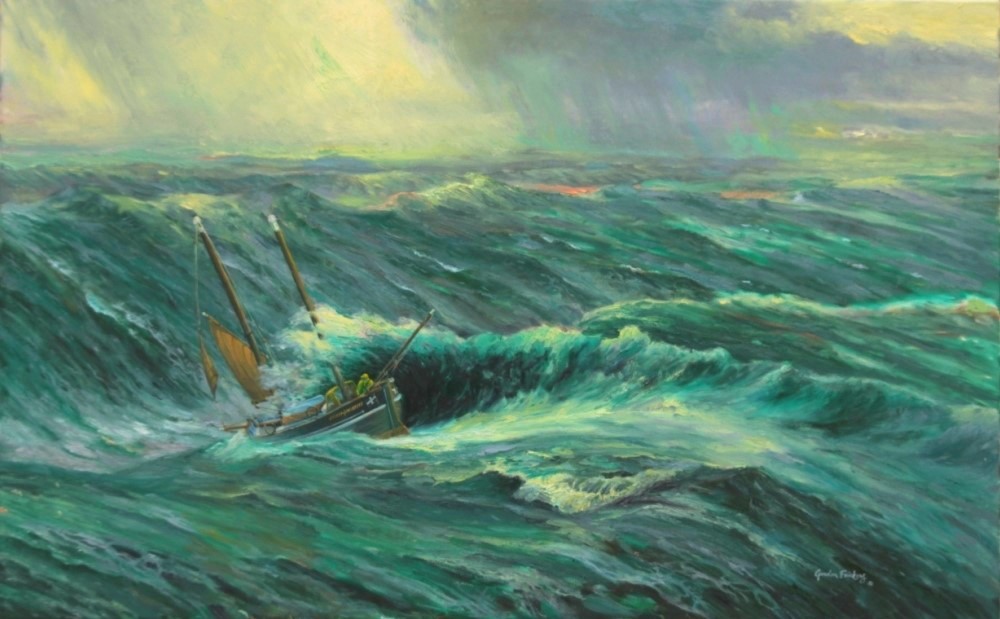 Spirit of Mystery, a voyage in time and space, a painting for the intrepid Pete Goss MBE, Legion d’Honneur.

Is there a special moment in your life that deserves a fine painting?

Payment can be > bank to bank or with your credit card Purchase Now  < via Paypal, in any currency ; or in instalments by arrangement, contact Gordon Frickers.

How much in my currency?  Try this free XE Currency converter.

BUY your a print NOW while we have a few copies left:  from this web site, print gallery,  as a fine art print, co-signed by the famous Pete Goss.

Pete Goss commissioned this painting, a story in it’s self, to commemorate, to leave a record of a unique voyage following in the wake of the original Cornish lugger ‘Mystery’ which for about 100 years had the record as the smallest boat to voyage England to Australia.

A special moment, a special place, in your life? You can acquire a splendid masterpiece, same quality as “Spirit of Mystery“.

You can commission a painting of this quality, courage up, call or email me.

I knew intuitively that a painting for Pete Goss would be a rare and special experience to savour because I can think of few greater compliments for an artist than to have people who have been there, done it and got the T shirt to endorse my art work.

I think it an honour to work with, paint for sea orientated people, to produce a timeless painting will give us all pleasure every time we see it upon our wall.

Looking for the best in fine art investments?

You have found one here.

Captain Richard Nicholls wrote in this log on 6th March 1855: “A terrific gale of wind – heaviest so far experienced. Our gallant little boat rides the mountains of sea remarkably well.”

The 37 ft ‘Mystery’ was an open Mounts Bay fishing Lugger built in Newlyn.

In an astonishing, unsung feat of heroic British seamanship she left Newlyn on Saturday 18 November 1854 and travelled about 11,800 nautical miles in 116 days before arriving in Melbourne on 14 March 1855.

The seven Cornishmen on board were prepared to risk their lives in the world’s wildest seas for the chance of a better life in Australia’s gold rush.

A Cornishman, Pete Goss built a replica lugger and followed in the wake of seven Cornishmen who made that heroic journey to Australia 154 years before.

‘Spirit of Mystery’ was launched on Saturday 21st June and set sail for Australia on 20th October 2008, arriving on 9th March 2009.

Pete Goss built and sailed the replica 38’ Mounts Bay Lugger to Australia to commemorate the incredible voyage made by seven Cornishmen in 1854 aboard the original Mystery.

Mystery is the smallest migrant vessel ever to make the perilous journey to Australia.

Many of their descendants from Captain Nicholls voyage live in Australia today.

“Spirit of Mystery in the Southern Ocean” is now available as a signed numbered print, priced from £167 including packing, insurance and post, with a limited number signed by Pete Goss; to make an order visit payment page.

How much is that in my currency?

Use our free XE Currency Converter or ask for details.

Birth of an idea, encouraged, ‘egged on’, by a mutual friend (George Skinner) I asked Pete if he would like to co operate in committing the Spirit of Mystery voyage to canvas.

Pete said, for him “Roaring Forties” was one of the very few paintings to really capture the Southern Ocean.

‘Roaring Forties’ continues to appear in journals world wide, as varied as Lloyds List International and Readers digest  and has had been described by the editor of the best selling journal Yachting Monthly (Dick Durham) as “iconic”.

‘Roaring Forties’ dramatically depicts RobinKnoxJohnston aboard Suhaili riding out a dangerous 80 foot plus Southern Ocean grey beard in 1968 as Robin became the first man to single-handed circumnavigate the globe non-stop.

In similar style, Robin Knox-Johnston had asked to meet me when he was preparing for a transatlantic race at Queen Anne’s Battery Marina, Plymouth.

Robin said he loved my merchant ship paintings which at that time were being exhibited at Queen Anne’s Battery Marina thanks to Mark Gates, the marina manager.

Robin and his wife, 6 months later, decided to celebrate Robin’s 50 th birthday by commissioning me to paint the picture which Robin eventually named ‘Roaring Forties’.

In his letter to me Robin wrote “For a brief inglorious moment there was me & two masts in sight & nothing but ocean in any direction for 2,000 miles”.

By the way, of ‘Roaring Forties‘, we still have a few copies left signed by Sir Robin Knox-Johnston.

These superb prints are real history, very collectable, to order go to our payment page or if in doubt call me, Gordon Frickers.

I was invited to meet at Pete Goss at the Mayflower marina on board Spirit of Mystery.

I thought that was an opportunity not to be missed if only to meet the famous Mr. Goss and see his boat which unusually these days is a lugger.

It was one appropriately stormy day at the Mayflower Marina, Plymouth that the we two men met for the first time to talk about the Mystery voyage and especially the Southern Ocean.

When I arrived Pete introduced himself with charming Cornish courtesy saying “Gordon it’s an honour to meet you”.

I was very taken aback and I was thinking ‘no Pete it’s an honour to meet YOU‘!

A special moment, the above photograph was taken by my camera set on ‘timer’. In the beautifully oak built cabin of the Spirit of Mystery while the renowned Pete Goss and I discussed and designed his new painting.

To discover the story read on and or order your awesome print visit my website ‘Prints’ page.

Pete proposed we have a mug of tea.

Then that Pete told me more about how and why his boat came to be built.

Pete said he had no idea at all how to go about creating a painting and thus was intrigued, keen to follow my creative process.

Pete insisted he wanted to commission a painting.

I read the Spirit of Mystery logs so I had several suggestions.

Much would depend on how Pete and his team reacted.

Spirit of Mystery is a replica of of the original lugger ‘Mystery’ which in 1854 became the smallest migrant vessel ever to make the perilous journey to Australia.

I was invited aboard the beautiful Spirit of Mystery.

We talked of the voyage and especially the Southern Ocean while I explained what was likely to happen as we would make a painting, an insight into a creative process.

I set to work in conversation with and questioning Pete Goss while making concept sketches based upon his comments.

The first proposals were naturally not unlike our starting point for “Roaring Forties”.

After about ¾ of an hour of chatting inspiration manifested.

Quite suddenly I had another idea that is very different from any of the previous sketches.

I drew it immediately and in about 45 seconds…

My simple ‘concept’ sketch was soon developed and unreservedly approved by the Pete and soon after by those closest to him, family and his team.

Would my efforts be up to standard, would Pete approve?

I said to Pete: “I have endeavoured to give our painting the qualities cameras and Photoshop don’t have. Much of the scene is as abstract as possible, light, physical texture, because that is how it is in bad weather. I pursued feeling and emotion rather than detail. The colours and the white water are influenced by the ragged sky, the sort of patchy sunlight and flying spray Pete had described.”

The result is our painting of ‘Spirit of Mystery‘, the boat, the voyage, revealed in a way no camera can capture.

‘Spirit of Mystery‘ is seen labouring in huge waves with a vicious cross sea.

Pete Goss says, this painting is truly reminiscent of his voyage and that of the original crew, whose Captain Richard Nicholls wrote in their log on 6th March 1855: “A terrific gale of wind, heaviest so far experienced.

paid me a classic compliment,  “I got exactly the painting I had hoped for”.

Pete added: “I particularly like the vast underlying swell rolling off into the infinite space of the Southern Ocean coupled with the immediacy of the nasty cross sea that threatens to overwhelm the boat. Gordon has a rare talent and has captured what is so hard to describe. When I first got the painting I put it on the kitchen table, made myself a cup of tea and lost myself in it for half an hour.”

“The painting has everything except the unforgettable noise of the huge Southern seas…” Pete Goss.

This splendid marine painting, measures 30” by 48” and will Pete says be framed in the same oak used to build Spirit of Mystery.

“Spirit of Mystery in the Southern Ocean” is available as superb signed numbered print.

At the time of writing this we have a few copies left signed by Pete Goss.

Payment can be > bank to bank or with your credit card Purchase Now  < via Paypal, in any currency ; or in instalments by arrangement, contact Gordon Frickers.

A very brief summary : sailing with only a storm jib and treble reefed main, Pete Goss said the cross sea felt like being repeatedly rammed by a car.

Pete is no stranger to the big seas and drama in the southern Ocean as you will know if you are familiar with the story of why he was awarded an MBE and la Légion d’Honneur.

Eventually the Spirit of Mystery was capsized.

The man at the tiller was thrown so hard he broke a leg.

Fortunately they were by then close to Australia.

Pete said the rescue service was magnificent and had a helicopter out in record  time to fly the injured crewman to hospital.

Over 7,000 people followed via Twitter, the whole story from building to arrival in Australia where the crew were met by descendants of the original Mystery crew.

During the capsize Spirit of Mystery’s oak built clinker (lapstake in the USA) dinghy was swept away.

Amazingly the dinghy was found on a Polynesian beach months later thousands of miles away.

The finder, a fisherman, returned the dinghy to Pete Goss.

Now that is, is it not, the true spirit of the ‘brotherhood of the sea’?

A special place, in your life?

You can acquire a splendid masterpiece, same quality as “Spirit of Mystery“.

You can commission a painting of this quality, courage up, call or email me.

For more information about Pete Goss and Spirit of Mystery project, visit: www.petegoss.com

Pete Goss is proud to be able to say his project created 2 new businesses, still up and running…and not least this is a tribute to the original voyage and crew Captained by Richard Nicholls.

Here’s a brief summary and you can discover more by reading my unconventional, illustrated résumée available on the web site.

I am fortunate to be one of the few artists to be invited, and the first and only marine artist to exhibit at, the European Parliament, Brussels (May 2011).

To have been the choice of many diverse & renowned organisations including Yamaha, British Telecom, the Ministry of Defence, Corum, Calmac and Deloitte & Touché.

Your best value is to buy from a dedicated artist, buy from a reputable, established artist direct from his studio.

To acquire a print or commission a similar painting, a pleasure to own, a sound investment, you can purchase in easy stages.

Email note, to foil spammers I’ve used ‘at’ in the address, : substitute @