Trafalgar, dawn, The French Perspective, a definitive painting, as seen from the French flagship Beaucenture at approximately 06.15 Monday 21st October 1805, the British fleet of Lord Nelson off Cape Trafalgar.

The Nelson and Trafalgar Series

Trafalgar Dawn, the French Perspective, 06.15, shown here as a print.

Exhibited at the European Parliament, May 2011

Plus, available as a beautiful heritage quality marine print on canvas for the look and feel of the original painting; from £ / € 177., signed and numbered.

This print makes a superb pair with its predecessor, “Trafalgar Dawn” (as seen at 06.05 from the British flagship HMS Victory).

purchase now bank to bank or > with your credit card Purchase Now < via Paypal, in any currency, or in instalments by arrangement, contact Gordon Frickers.

Trafalgar Dawn, French Perspective, this is painting a result of over 10 years persistent research.

I carefully plotted, at dawn as shown here with ships individually named, where the ships were dispersed over 3 x 4 miles of ocean.

I’m quietly confident no one will ever make a more accurate representation of “Trafalgar Dawn, French Perspective”.

On the margin of the signed numbered prints I have added a drawing and names each British ship individually.

A beautiful heritage quality marine print on canvas for the look and feel of the original painting, is available from the PRINTS page from £ / € 177., signed and numbered, sent by recorded delivery.

I had the unprecedented honour to be ‘Official Artist’ for HMS Victory as she was prepared for the  2005, 200th anniversary of the battle of Trafalgar.

With a letter of introduction from then then commander of HMS Victory I have unique access to archives in Great Britain and throughout Europe.

The ‘Nelson and Trafalgar’ core collection is our first fruit.

To acquire or commission a similar painting or print; it’s simple, secure; place a deposit or payment on our Payment page for your Gordon Frickers original painting (or in some cases a Heritage quality print) or feel free to

The rising sun is highlighting the topsails of the British fleet against the darker western sky.

A Trafalgar painting, the British fleet of Lord Nelson off Cape Trafalgar, as seen from the French flagship Beaucenture at approximately 06.15 Monday 21st October 1805.

On the darker horizon a little after the British sighted the Combined Fleet described as “a forest of masts” against the sunrise, here, 10 minutes later, as reported in the surviving French officers accounts and diagrams the contrary perspective is seen on that fateful dawn.

All officers of the Combined Fleet reported that Nelson’s fleet was not in regular order.

Some 10 years passed while I researched this painting, to make a pair with the now famous “Trafalgar Dawn” the view from HMS Victory.

The classic “Trafalgar Dawn” appears in a number of  books including by the foremost authority on this subject, Mr. Peter Goodwin.

of the British ships has been much debated by scholars and naval officers for over two hundred years.

Here, you are one of the first people since eyewitnesses to see quite accurately what the men of the Combined Fleet saw from the French flagship Bucentaure.

Some of the essential details are reluctant to be found.

Careful reading of the period documents clearly proves the commanders of the Combined Fleet knew of the British presence, were not surprised and furthermore, Vice Admiral Villeneuve anticipated Nelson’s tactics.

All the uniforms and clothing of the Frenchmen men were checked in detail, so are reliable as a document.

Any reputable gallery should be delighted to offer you this painting for this price… … and are welcome to help you buy this classic painting, a timeless subject.

The Admiralty Committee Report of 1913 :

In 1911 the King appointed an Admiralty Committee to reveal what really happened at the battle of Trafalgar.

The Admiralty Committee report of 1913 is primarily based upon the British ship log books.

Published in 1913 this report forms the principal source for the layout of this painting.

My secondary sources include the diaries, logs and maps drawn by the surviving French and Spanish officers of the Combined Fleet much of which was unavailable to the Admiralty Committee of 1913.

My other sources I’ve listed elsewhere on this website.

Overall I found many corrections resulted from my research into archives unavailable in 1913, to the Admiralty Committee.

Thus I give you an exceptional version here of that moment before the momentous event that was the battle of Trafalgar, the results from my extensive travels and research.

I have discovered ‘new’ information  so represent the definitive impression.

I followed the trail to Spain, the Madrid Marine archives and museum, Cadiz University and to San Sebastian Naval Base Museum as a guest of the Spanish Navy.

Thanks in part to my letter of introduction, everywhere I was shown much courtesy and cooperation by our European collegues.

Consequently much was revealed that is not normally available to scholars.

I still have copies of all the reports and drawings made by surviving senior officers of the Combined Fleet immediately after the battle of Trafalgar.

To acquire or commission a similar painting or print; it’s simple and secure.

Contact me or place your deposit or payment on our Payment page for your Gordon Frickers original painting (or in some cases a Heritage quality print).

was certainly unlucky with the weather.

A heavy swell from the west, taken abeam by their ships, spoiling their gunnery.

Examples being their guns were not equipped with flintlocks and the Spanish were obliged to use inexperienced men, their fishing villages having been recently devastated by plague.

Why this was so is a story in itself, which I may tell you another time, if you so wish.

Knowing this the officers of the Combined Fleet never the less choose to fight.

Some Spanish ships were unable to engage, many that did engage fought with the utmost gallantry. 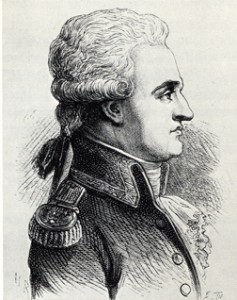 In my painting, Villeneuve’s appearance is ‘borrowed’ from a contemporary portrait.

Pierre Charles Jean Baptiste Silvestre de Villeneuve was born into an aristocratic family at Valensoles in Provence in 1763.

He joined the French navy at the age of 15.

A good administrator, he did not consider himself a “fighting Admiral” and several times asked Napoleon to  replace him.

A working ‘Sketch for Trafalgar Dawn’, the French Perspective, price upon application.

On the margin of the signed numbered prints I have added a drawing and names each British ship individually. 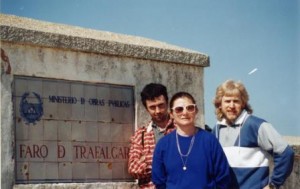 The Combined Fleet could not have been less lucky with the weather, a swell from the west, taken abeam made their ships roll heavily, spoiling their gunnery.

Nevertheless, after the battle at Gibraltar, HMS Victory had 600 cannon balls removed from her hull and of course that does not include the many others that hit various parts of ‘Victory‘.

To acquire or commission a similar painting or print; it’s simple, secure; place a deposit or payment on our Payment page for your Gordon Frickers original painting (or in some cases a Heritage quality print) or feel free to

> with your credit card Purchase Now < via Paypal, in any currency, or £/€, or bank to bank; or in instalments by arrangement, contact Gordon Frickers.

Most accounts of the Battle of Trafalgar story vary and they are full of errors, the majority of plans and paintings are equally misleading.

To better understand the battle of Trafalgar, here are some places to start.

WE must ask ourselves the following questions:

Buy Now, this your chance, a fine art print on canvas, numbered, signed, via our Marine art Prints or ‘Payments‘ pages using Paypal or bank to bank

Email note, to foil spammers I’ve used ‘at’ in the address, please substitute @