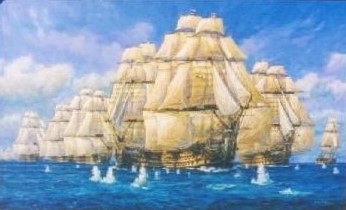 HMS Victory, battle of Trafalgar, ranging shots, the first hole in her fore topsail, the battle began in earnest.

This painting is one of “The Nelson and Trafalgar Collection Series”, read on …

As described in diaries and log books by those present at the battle of Trafalgar, a hole appeared in HMS Victory ‘s fore topsail, this painting is as accurate as anyone is going to get.

Purchase > with your credit card Purchase Now  < via Paypal, in any currency, or £ bank to bank; or in instalments by arrangement, contact Gordon Frickers.

Many distinguished people and renowned companies have chosen Frickers paintings as you can discover why by reading my résumée.

Any reputable gallery should be delighted to offer you this Trafalgar painting for this price… … and are welcome to help you buy this classic painting, a timeless subject.

What makes for a classic painting, a time proof investment? Your thoughts?

The moment portrayed is as described in diaries and log books by those present at the battle of Trafalgar, a hole appeared in HMS Victory’s fore topsail.

This painting was created soon after Mr. Peter Goodwin Keeper and curator of HMS Victory had discovered the original fore topsail of HMS Victory in a loft in Portsmouth Historic Dockyard.

By carefully reading of original documents I gradually unraveled this moment portrayed.

My key to realisation

The sails Victory had set at the moment portrayed, where the first hole appeared were all carefully checked with records and the leading authorities I was privileged to have access to while the only person to have ever been ‘Official Artist’ to HMS Victory.

Therefore this painting is as accurate as anyone is going to get.

“First Shots, Trafalgar” remains is as fresh with salt spray and the reverberation of cannons today when I created this painting in 1994/5.

as popularly thought sail straight at the French line.

The truth supported by facts is more complex, more interesting and Nelson was more clever than that.

Here is a twist upon the traditionally version outlined in most but not all books on Trafalgar.

Villeneuve understood his predicament very well and that thorough understanding was the reason Villeneuve ordered the Combined Fleet during the morning, to reverse its course.

An order which given the light airs, westerly ground swell and inexperience of some crews and  seriously disrupted the formation of the Combined Fleet.

The order did though, place the safe haven of Cadiz under the lee of the Combined Fleet so had significant consequences during the stormy days following the battle of Trafalgar.

was to explore and paint lesser known but interesting aspects of the story of Nelson, Victory and Trafalgar.

So, what really happened?

My extensive, meticulous research included reading widely and visiting archives and speaking with specialists and experts in London, Madrid, Cadiz, San Sebastian (Naval Base), Paris, Brest (Naval Base), Liverpool, Portsmouth and of course, his own home port of Plymouth.

I had the privileged and honour of being  official marine artist to HMS Victory for Victory 2er and Curator, and his team of experts to return Victory to her original ‘Trafalgar’ condition for the 2005 bi centenary.

The Society of Nautical Research :

was the largely responsible for saving Victory in 1921 for posterity and continues to support the ship’s well being.

However the ship they saved had been drastically altered since Nelson’s days.

Something had to be done before 2005, the 200th anniversary of the battle of Trafalgar and funds were needed.

The restoration was an awesome success as you would have discovered for yourself if you take the ‘long tour’ or have a private tour of HMS Victory.

Click on the small images to see detail from First Shots, Trafalgar.

Further reading , Trafalgar, what was The Nelson Touch? HMS Victory coming under fire at Trafalgar.

Email note, to foil spammers I’ve used ‘at’ in the address, please substitute @

Looking for the very best in marine art?

You have found it here:

Fees and our Terms are among the most generous on the Internet, don’t hesitate to ask for details.