I was honoured to be the Official Artist to HMS Victory, 1993 to 1998 and have remained involved with this subject ever since.

Why was Trafalgar important? The battle ended a very serious threat of invasion. Napoleon had 350,000 troops ready to embark.

Trafalgar remains an important symbol for all free peoples.

“It is upon the Navy under the Providence of God that the safety, honour and welfare of this realm do chiefly depend” – from the Articles of War (1652) read weekly to all Royal Navy ships crews for 300 years.

If you are looking for the best in marine painting you have found it here. 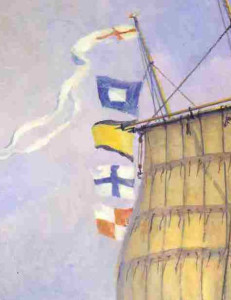 Click on the images to see larger versions, the blue image titles are hyperlinks that will take you to further reading on that painting.

My brief was to ‘paint so of the less well known but interesting aspects of the stories of Nelson and HMS Victory’.

This ‘Nelson and Trafalgar Collection’ represents an unrepeatable life experience.

Situations change, a time that witnessed the production of this remarkable series is now its self part of the Nelson and Trafalgar story.

Today HMS Victory is magnificently preserved at Portsmouth Historic Dockyard, part of the naval base and open to the public. To Visit HMS Victory is to have an experience you will never forget.

As a collection these paintings have only been exhibited once, privately by Rochay Elite who created a “Trafalgar Soirée” (at The Army & Navy Club, St James, Pall Mall, London,  October 2016).

When official artist to HMS Victory, I had access to leading experts and rarely see documents in Britain, France and Spain.  The collections included British, French and Spanish ships of the Georgian and Napoleonic period, original documents, journals, letters and mementos.

HMS Victory is iconic; the only surviving example of a type of 100 + gun war ship that was at one time the pride of the fleets of great nations, the First Rate Ship of the Line of Battle.

It is as if only one castle had survived to our time. By happy chance Victory was also one of the finest and most distinguished First Rates ever built.

“Come, cheer up, my lads, ’tis to glory we steer“, the opening line of Hearts of Oak, anthem of the Royal Navy. We should be focused on you commissioning a painting or buying print, what the heck,  your pleasure the rest of the text is under ‘miscellaneous’ on this page.

This story is addressed briefly below and in more detail via the “Further reading”  a link appears after the last painting.

This “Trafalgar Collection”  results from a unique period when talents and time combined,  when I as official artist, had unrestricted access to HMS Victory, the full co operation of her Keeper and Curator Peter Goodwin, the National Maritime Museum (Greenwich London), the Royal Navy Museum,

I had the great good fortune to have a letter of introduction from Commander Mike Cheshire, HMS Victory’s Captain, a letter that opened many other doors, many archives,  including in London, Plymouth, Liverpool, Taunton and France [Brest, Paris] and Spain [Mardid, San Sebastian, Cadiz].

Nelson was a warm hearted fellow, considerate of others, tremendously brave [on the eve of Trafalgar he is quoted as saying “this will be my 106th action”].
He was much loved by many including the plain Jack Tars.
Tough real men many of whom openly blubbered when they learnt of his death,

All of those and many other English sea men together certainly changed world history.

The story behind and results from “Nelson’s Bright Yellow’ included some extraordinary discoveries that challenged established views regarding the appearance of Nelson’s ships.

They are reflected in this collection.

For young people looking for role models, I would recommend they find [Amazon?] and read a copy of The Life of Nelson by the American author Captain A. T. Mahan [USN] written in 1897.
Mahan was an American naval officer and historian who was a highly influential exponent of sea power in the late 19th and early 20th centuries.

Nelson had a considerable sense of destiny, knew Trafalgar would be the last really decisive naval battle of the Napoleonic Wars 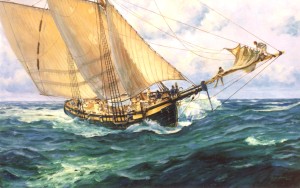 A typical French privateer of the period, the painting celebrates the superb replica built at Brest, launched 1996.

An example of exceptional and meticulous research was Gordon’s visit to Her Majesty’s Hydrographic Office, Taunton.

A huge, secure government complex definitely not open to the public where for generations ‘Admiralty Charts’ have been and still are produced.

A very big THANK YOU one and all goes unreservedly for the good will and good humour of many people in Britain, France and Spain contributed to this amazing Trafalgar Collection.

I wish I could name you all and shake your hands again.

Peter Goodwin’s brief was to restore HMS Victory to her ‘Trafalgar Condition’ in readiness for the 2005 bi centenary of Trafalgar.

Further Reading: < This is a hyperlink to an expanded introduction to this awesome series, enjoy.

Come, cheer up, my lads, ’tis to glory we steer, To add something more to this wonderful year; To honour we call you, as freemen not slaves, For who are so free as the sons of the waves Heart of oak are our ships, jolly tars are our men, we always are ready; Steady, boys, steady! We’ll fight and we’ll conquer again and again. We ne’er see our foes but we wish them to stay, They never see us but they wish us away; If they run,why we follow and run them ashore, And if they won’t fight us, what cannot do more. we still make them feel and we still make them flee, and drub them at shore as we drub them at sea, so cheer up me lads with one heart let us sing, oh soldiers and sailors, our statesmen and king.

A ‘letter to a colleague‘

Thank you Randy Wright, an interesting reply. I’ll check out the references you have thoughtfully provided. I’m aware of the Chinese voyages, have read a little of the archaeology but never read a thorough summary.

Re reading my response, if you don’t object, I’ll add this as a ‘letter to a colleague’ on my web site, “Nelson and Trafalgar Collection” page.

I’m fully aware that history as presented is often short on facts, for example I thoroughly researched when I painted my “Nelson and Trafalgar Collection” back in the 1990’s. https://www.frickers.co.uk/art/marine-art/war-ships/the-trafalgar-collection/ when official artist to HMS Victory.

There is a version of ‘Trafalgar’ on Utube that really irritates me it’s so inaccurate, almost an insult to the men of both sides who served.

I found in all three countries many experts very willing to help and some with astonishing views. For example, the curator, the gentleman in charge of the naval archive at the Naval base of San Sebastian (Cadiz) where we where very warmly, most hospitably received by the port Admiral, which I visited with French colleagues told me in all seriousness, ‘the British never admit the Spanish sank two British ships at Trafalgar’….

Certainly no evidence to support that and plenty to discredit it.

I was also told Nelson had a girlfriend in Cadiz so regularly, discreetly visited.

That romance might be true during a pre Trafalgar period but was not in my brief to follow up. Generally I’ve found facts usually more interesting, certainly more enlightening than the fictions that pose as facts.

In the case of Nelson and Trafalgar I found the truth as revealed by original logs, diaries, letters and charts more complex, more interesting and more to the credit of the men of all nations present than history likes to admit.

In short, the French and Spanish behaved honourably, those engaged fought very bravely, behaved gallantly in defeat but never stood a chance against a decidedly superior British fleet with more advanced technology.

The British were very skilfully lead by Nelson and his captains, they too fought bravely and behaved impeccably. I completely agree with you re revisionist history, it’s not just something the Muslims have invented, likewise, false news.

I worked briefly as a photojournalist so rapidly became aware we get the news editors and managers want us to have. I stopped taking newspaper reports seriously !

You are cordially invited to enjoy the fun and fascination of following The Art of Gordon Frickers on his blog and or https://www.facebook.com/gordon.frickers

You can pay for your painting by instalments if it's easier for you. Just Contact me for more information.