Liberty ship ‘Trun’ and a general history of the class :

The LIBERTY ships became the largest single class of merchant ships ever built.

A back handed compliment, this splendid original painting of a Liberty class ship in heavy weather, a private commission for a French friend M. Claude Picot who had very happy memories of his time on “Trun”.

A former deck officer on board Trun he was working for the Companie Generale Trans-Atlantique.

A back handed compliment if every there was one?

Be sure to always insure any ‘Gordon Frickers’ paintings you have.

The risk and strain is nicely illustrated by this painting of “Trun” a Liberty ship sold to France after the war.
This painting commissioned by former deck officer

Liberty ships  had an exaggerated reputation for breaking in two in cold heavy weather and heavy seas, just for’ard of the bridge; this painting nicely illustrating the risk.

That said, many Liberty ships were still working well into  the 1970’s.

The Liberty ships were a development of a British design, built in the USA as replacements for the very heavy losses, mostly due to U boats, the record built time was less than a week from keel laid to launching.

It was considered, if a Liberty ship survived one voyage they had paid for themselves.

Despite the fast building these fine ships developed from proven designs proved very popular with their crews who regarded them as luxurious compared to their forerunners.

This painting was last heard of reported stolen with one other, a beautiful study of of his yacht “Nizou IV“, shown with the Picard family aboard, home port to loo’ard  and Sicily with it’s famous volcano in the background from Hotel Bellevue in Sicily.

“Liberty ship, North Atlantic Winter”, How and why I collected this Liberty ship info…
I discovered Liberty ships some times sank.

I remembered some of the “old boys” pored scorn on Liberty ships.

Worst cases including ships literally breaking in 2, usually right in front of the accommodation structure so this painting may be said to nicely illustrate the design’s weakest point.

If Liberty ships occasionally broke in 2, suffered other design / construction flaws like occasionally loosing their rudders how come they were popular with their crews?

What was going on?

While working on some experimental landscapes, (not shown on this site but I still have them) about as far from the sea as you can get in Europe, I met M. Claude Picot and his wife Sylvie.

They owned a château I was painting and invited me and my companion in for lunch; too good to resist! 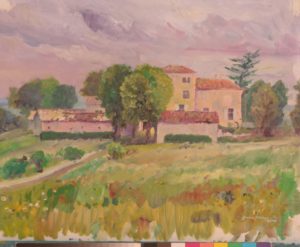 We became friends as some times you do, even invite my family to their 80 bedroom hotel in Sicily.

Claude, an ex mariner, decided to commission 2 marine paintings from me, “his” Liberty ship being one, the other being his yacht “Nizou IV off Sicily, Vesuvius in the background”, with family aboard Nizou IV.

When I am preparing a painting I research … all the facts I can get, too much info is better than too little is my thinking.

In turn, as I became more fascinated by Liberty ships, and was painting a PQ convoy scene for another client, I decided to paint “Liberty ship Convoy” on speculation (recently made available as a Prestige Limited Edition print).

I’m ready to order a print, take me to the print order form.

I’d be delighted to hear from you, just hit on contact us and send a message.

The Liberty Ships were much criticised when new for the weakness of their welded construction but then they were never intended to be long lived ships.

I remember one laid up at King Harry Reach on the River Fal (Cornwall) in the early 1970’s.
She must have been one of the very last Liberty ships, Greek of course.

In those days I was a press photographer and I some washed down a beer with the Falmouth tug men at the Chain Locker, Falmouth Quay.

Their view was with a tug at each end that old Liberty ship was so rusty they’d pull her in two!

The Liberty ship, with superior accommodation, all of it amidships for all the crew were undoubtedly safer and more luxurious.

Compared with British tramp steamers most of which still accommodated crew in an unheated foc’sle in the eyes of the ships where the motion was most felt and dangerous to reach in bad weather and singularly comfortless.

Besides the Liberty ships that sunk, it is often forgotten, many survived damage by storms, mines bombs and torpedoes.

I recall my Father vividly describing how he and his men [Pioneer Crops soldiers] unloaded several damaged ships.

As soldier he left me a vivid description of working in the holds, how unspoilt grain was saved and in the heat how one man lost his jacket with all his ID up a grain sucking pipe!

When the war ended, the United States had 40 million tons of new shipping at its disposal, of which, about two-thirds were Liberty types.

I’m ready to commission, take me to how to how to order

By the achievements of her war economy, the U.S.A. had become the owner of the largest fleet of merchant ships in the world.

Because of the sheer number of Liberty ships they had at their disposal, Congress realised sales of these ships could create a threat to the America’s own postwar merchant fleet.

The purpose of the U.S. Ship Sales Act was to make ships available to private operators in Allied countries as part of an attempt by America to assist a European recovery.

Those Liberty ships transferred under Lend Lease to Great Britain during World War 2 were almost always given a name with the prefix “SAM”, which referred to “Uncle Sam”, -usually replacing a U.S.-given name.

After the war ships were transferred for about what they cost to build, to many nations.

Allied and neutral shipping lost a further 9.8 million tons, the enemy about 10 million; equal to just over 50% of world tonnage at the outbreak of war in September 1939.
By 1946, the world fleet which meant mostly allied shipping was estimated despite the Axis powers efforts, at 72.9 million gross tons, an increase of 11.5 million tons over the pre-war total.

A large proportion of this tonnage was built during the war, as standard type cargo ships and tankers.

In fact, the figure comprised the major proportion of the estimated 43 million tons constructed during wartime.

At the end of the war, Liberty ships represented 17.75 million gross tons of the tonnage in service, or almost 25% of the world’s total.

Built December 1943 by Calship to the order of the US War Shipping Admin: Managed by the Waterman Steamship Corp., Mobile.

The O’Brien is docked
at Pier 45 at Fisherman’s
Wharf, San Francisco

The office is at Pier 23
San Francisco 94111
Cruise aboard the S.S. Jeremiah O’Brien in experience another year of living history.