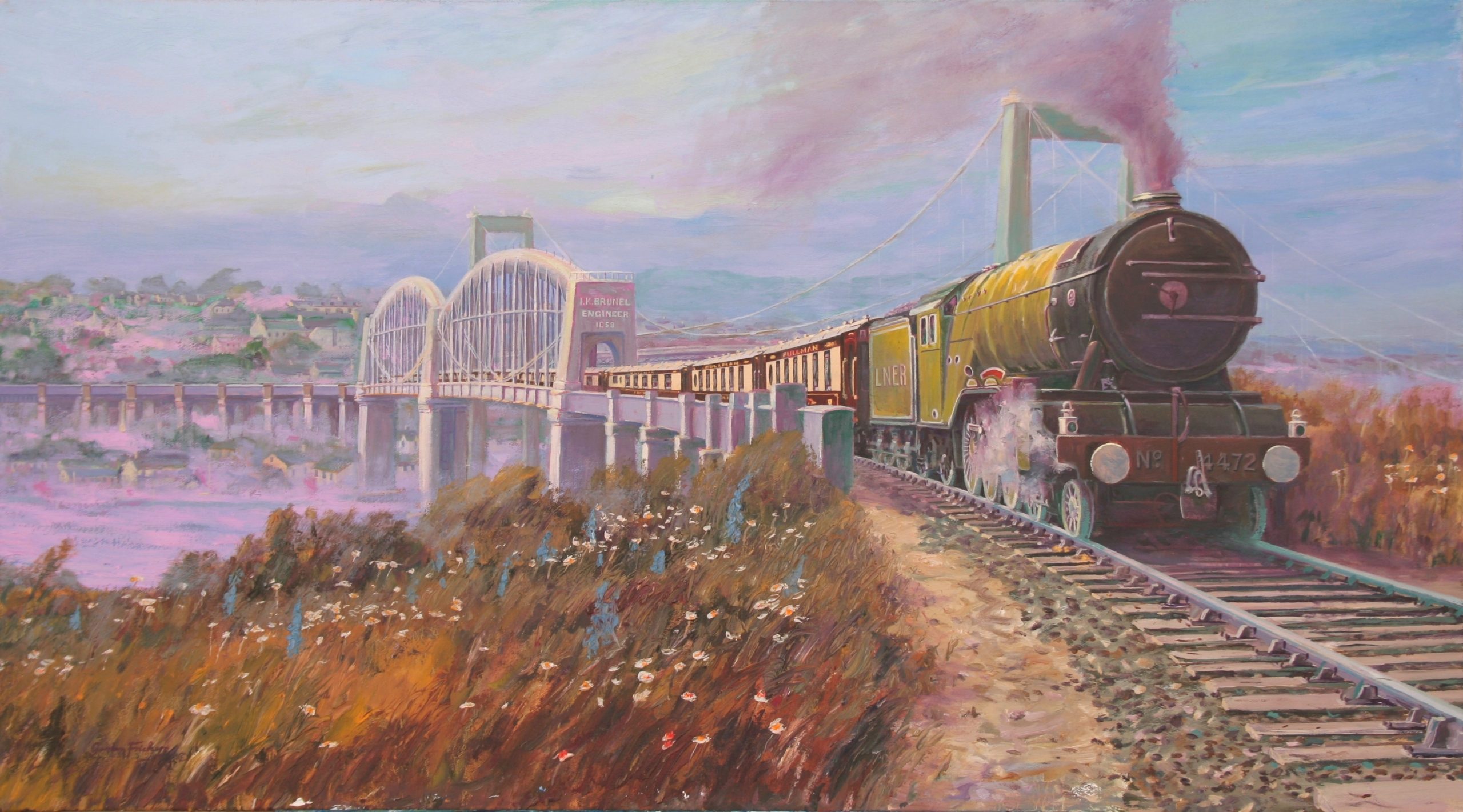 How much in my currency?  Try this   free XE Currency converter.

Frickers paintings have been exhibited at many venues in Britain and Europe including by invitation a one man show in the European Parliament.

Minor ports like Saltash, Cornwall on the river Tamar were formerly places of some importance.
Saltash was a stopping point for trade on the 35 km long navigable part of the river Tamar, a departure point for hinterland exports and a thriving place of ship and boat building.
Formerly a ferry was maintained by royal warrant as a gateway to and from the ‘granite kingdom’ of Cornwall.


#Brunel widely considered one of the great engineers of all time designed and built in 1859 the then revolutionary now renowned Royal Albert Bridge for the Great Western Railway.
Today Saltash is paired with a separate road bridge to England by the Tamar Suspension bridge.
The coming of rail and even more so of lorries and trucks ended the former way of life of Saltash port.

was created as a thank you for a friend who helped me when no one else could or would.

When pressed he asked for a picture of the world’s most famous steam engine, the #FlyingScotsman with Pullman coaches and the Royal Albert Bridge.
Since painting this the Flying Scotsman, thought by some to be too heavy for the bridge has made the crossing to visit the legendary county of #Cornwall.
The location is real, all the details researched with by me with my usual meticulous attention including individual coaches and importantly, visits to the site.

Sparksie had that train painting, of the Flying Scotsman on his PC screen as the Royal Albert Bridge is hot news in Plymouth at present (are we missing out).

Nice to be painting topical subjects!

The Royal Albert Bridge as I have mentioned before on this blog, is in a very poor state at present.

I am now told a decision to preserve this very historic bridge has been approved ( I should d********** well think so to) so the current debate is which colour?

The present grey is not the original colour, cream was.

So the cream shown on the Pullman coaches in my painting is quite appropriate and not unlike the original GWR (Great Western Railway) colours.

As likely they have a stock of grey.

I think the grey looks remarkably similar to what we used to call battleship grey.

Now where do we see that colour on the River Tamar?

Credit where it is due

Special thanks to Jerry Sibley for the idea, inspiration and his practical help.
Gareth Mawdsley for photographs taken under Frickers directions on the track and to Ian Criddle of Plymouth Naval Reference Library also Mike Jeffries for a brutal but helpful critic of the Flying Scotsman which resulted in several significant improvements to the appearance of the Engine in this atmospheric painting.

Buy Now, while you have this chance, a fine art print on canvas, numbered, signed,  via our Marine Art Prints or ‘Payments‘ pages using Paypal or bank to bank