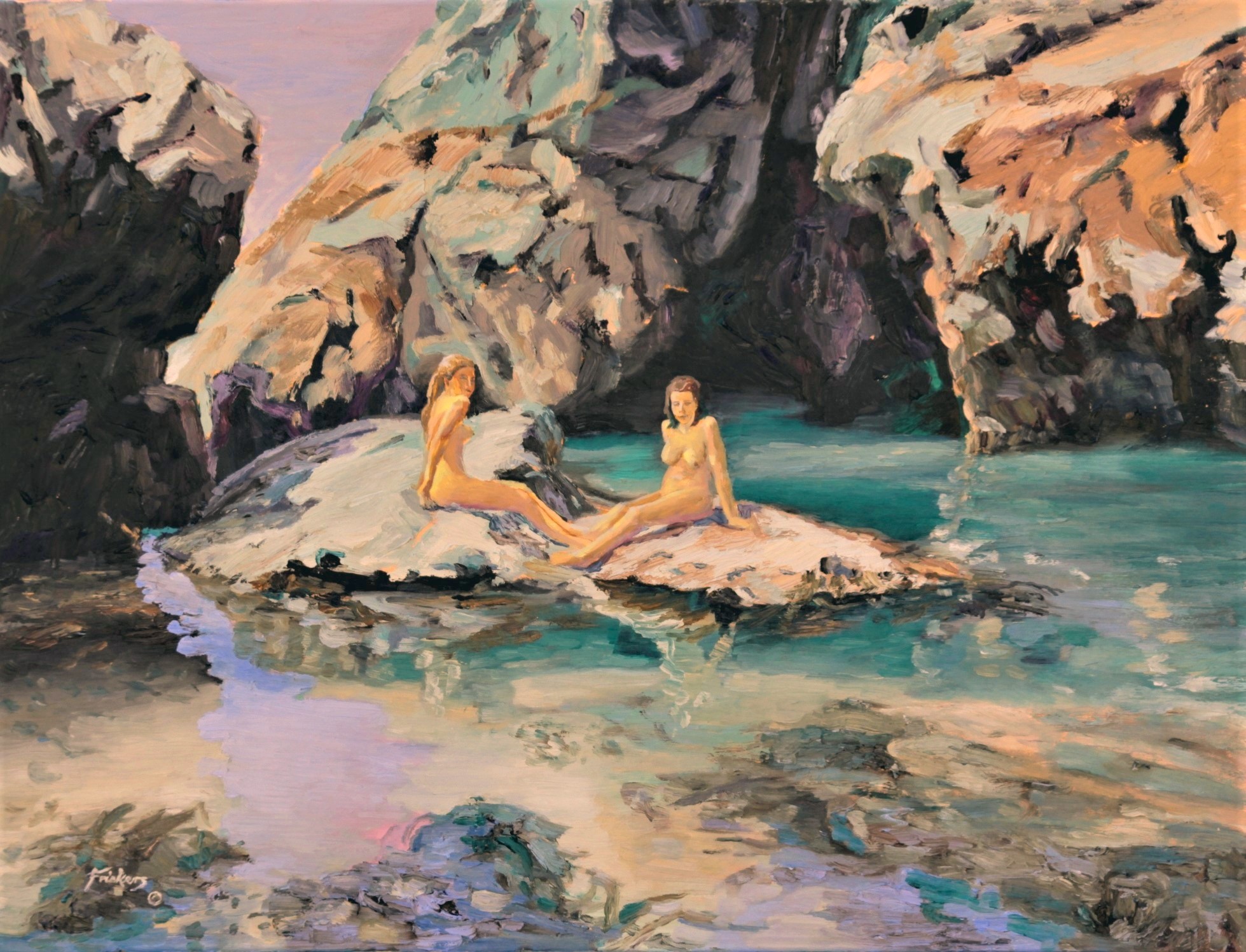 Of mermaids, questions from the famous author Simon Young, a British folklore historian based in Italy.

Simon wrote to me “I’ve been sent, by a colleague, the name Mermaid’s Pool on Kynance Cove and the earliest reference I can find is to a painting you did there. I just wondered if you could tell me anything about the name or its history“.

I thank you for your correspondence which fascinated and amused me.
I’ll write a blog and Facebook piece about this by way of softly promoting my unsold painting.
If you would like your contact information included i’d be pleased to do that for you.
Your questions :
“then that it was a name you created for this marvellous place and that extraordinary painting?” : it was not me who created this enchanting place name, it is the local name. That said I did not follow up on why, how or when the name was adopted.
I’ll add more that may help you, after I answer your second question.
“What year did you do the painting?” : I’m not sure about the year, soon after 2003 I guess. I first visited Kynance Cove in the early 1970’s.
In those days I was living in Falmouth and working as the photographer for the Packet Group of newspapers. They were a part of Beaverbrook Western, Beaverbrook also owning the (National) Daily Express and so on. The Lizard Peninsular was a part of my patch. In those sunny days now far astern I invested in a set of Ordnance survey maps of all Cornwall.
With my first wife we often made sorites to explore Cornwall. The county was still relatively remote retaining many local customs and legends which interested us, much of which has today largely disappeared.
Our pleasures included visiting remote sites, buying old books about Cornish life and learning about the fast Disappearing culture and legends.
When exactly we first visited Kynance cove I’m unsure, probably about 1974.
I’m unsure when I made the painting however, I can tell you a bit more.
The Lizard peninsular, most southerly land of the British Isles remains to this day one of the remoter regions of Britain.
Local people used to take down sign posts to discourage visitors.
However as a young regional press photographer I soon became well known and was always warmly welcomed.
I’m very glad I saw the last of old Cornwall, ‘The Granite Kingdom’, before it faded.
I’m honoured to be one of the few remaining custodians of the old legends, stories that include much more than ‘Mermaid’s Pool’, tales of Knockers in the mines, of giants, of king Arthur, Trystan and Isolde, of other mermaids such as the one at Zennor ….
You may be aware The Lizard is famous for many things including its very picturesque villages, coves, cliffs, beaches, radio communication, RNAS Culdrose and the rather special green granite.
The latter used to be much sought after for building works. An example, either London or Westminster bridge, I forget which, in London is made of the green Lizard granite.
Local people make and sell beautiful polished household nick nacks for tourists, lighthouses, ashtarys, flower vases, Celtic jewelry and so on.
Kynance Cove is very sheltered from northerly and easterly winds, dangerous in a strong South westerly.
Consequently, during my second marriage when I lived at Plymstock, Plymouth, the secluded cove, a 2 and a half hour drive West, on sunny days, with its fisherman’s cottage famous for Cornish Cream teas and Cornish ice cream, became a popular outing with my wife and children.
The beaches, swept by the occasional gales are pristine fine sand, the salty granite rocks are wave polished. The shallow mostly sandy waters rapidly deepen outside the cove so are usually very clear, pure, safe for paddling and swimming.
During that period I explored the cliffs and bays around the cove taking for pleasure and curiosity, many photographs.
Somewhere among those photographs, if it has survived my turbulent life, is the one of these two beauties. swimmers sunbathing, which inspired the painting you are enjoying here.
At Kynance cove, my family and I soon discovered by climbing through a rocky gully, exposed from half tide, the lovely miniature cove local people call “Queen’s Cove” which in turn leads through another rocky gully to the even more enchanting “Mermaid’s Cove”.
The location and names we discovered from local people so all credit goes to them.
I assume but never asked, that rock only exposed when the tide has dropped sufficiently, gave the cove its name when mermaids were seen on the table rock
Mermaid’s Cove is very special for several reasons.
This is a fine cove made entirely of green granite, the undersea floor carpeted with fine grained near white, pale green sand, as shown in my painting.
A cozily small cove, it is very sheltered from any wind so ideal for sunbathing.
There is no obvious direct connection to the ocean except at high tide.
Even at low tide the water remains deep around the central ‘table’ rock.
Adventurous children love to jump for thrills off the southern cliff, the 10 or 15 feet, into the crystal waters.
There is another ‘secret’.
A swimmer ideally with a mask and snorkel can pass via a submerged tunnel, into the bay.
I’ve done that many times.
The adventure is well rewarded.
As one emerges into the bay one finds oneself in a most beautiful underwater garden.
A world of rocks and fine wave rippled white sand, an astonishing variety of colour rich plants, many gentle swaying.
The cool, pristine salt water is an animal playground alive with numerous small creatures and further populated with idly swimming small fish.
A veritable underwater Eden.
If that wouldn’t attract mermaids, kindly tell me what will?
I’ve sometimes thought of making a new painting of this Cove of happy memories. Maybe I will, maybe not?
The painting you see was created during soon after the year 2000.