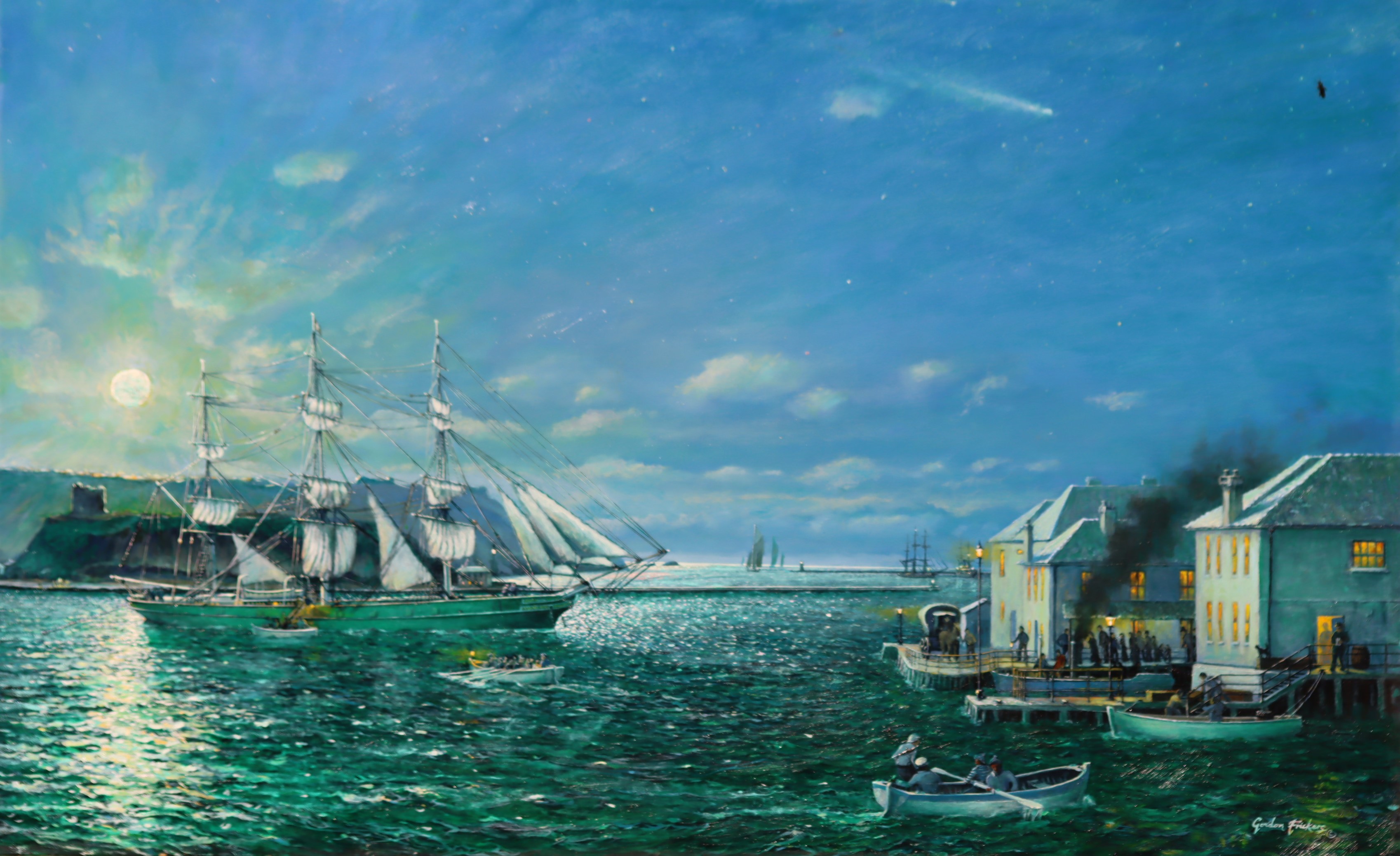 Plymouth a lost history of emigration documented via this painting and coupled to a rightly famous name, Samuel Plimsol.

76 x 121 cm (30″ x 48″) available, £ 15,007 by arrangement, in instalments,
A lost history of the world famous Plymouth, at last now documented by this painting.
Your best value, buy from a dedicated artist- buy from a reputable, dedicated, established artist direct from my studio.

Now is your chance,

How much in my currency? Try this free XE Currency converter.

You have a nice choice using £, €, U S $ for this influential, significant painting which is an absolute bargain; any knowledgeable gallery of agent would ask double.

A warm August moon is rising over ancient Mount Batten with its quarry, new breakwater and distinctive Martello Tower. 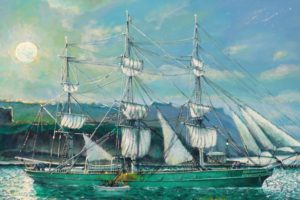 This painting is diligently researched to show you an aspect of Plymouth the citizens can be justifiably proud of.

Now is your chance, Purchase Now , Paypal or bank to bank;

How much in my currency? Try this free XE Currency converter.

You have a choice; using £, €, U S $,  for these influential, significant paintings are an absolute bargain; any knowledgeable gallery of agent would ask double.

I used to race dinghies and teach children sailing on The Cattewater and Plymouth Sound when I had a family and this was where I moored my yacht “Music Maker”.

I have often admired the way Jenny cliff and Plymouth Sound glow with mysterious moonlight and moon shadows.

I’d often thought this location begged to become a painting with a full moon rising over the Cattewater.

My questions where when and how?

I thought I knew this location intimately.
Through this painting I was to discover much more.
Little did I realise just how much history I was standing when on Phoenix Wharf, on and looking at … or how many souls had emigrated via Plymouth.

Plymouth has a long and rich history

I discovered the lost story of the emigration depot.

An idea emerged for a rich and historical, accurate as modern research can make possible, painting to detail, migrants and their baggage departing, while the harbour master’s black cat looks on…

Plymouth is already famous as the departure point of THE Mayflower with the Pilgrim Fathers.

The port of Plymouth is known to have been frequented by pre roman ships of Phoenicia, The Phoenicians left anchors in the Cattewater, they used the beach in the lee of Mount Batten to trade for a precious metal mined in Devon and Cornwall, especially tin.

Many a famous voyage commenced at Plymouth, Francis Drake sailed from Plymouth to become the first captain [second ship but captain Magellan died] to complete a circumnavigation of this planet.

He discovered among other things that South America was not attached to another continent;

Drake’s Passage is still the name for the waters off stormy Cape Horn.

Captain James Cook, Admiral Horatio Nelson, Charles Darwin, are the names of just a few of the distinguished others who navigated from Plymouth.

By the 19th century Plymouth had became the 3rd busiest British point of departure.

Here with this fine painting we see the Samuel Plimsol under government contract, having been specially converted when outbound for emigrants including with cabins and a surgeon.

The famous ship, the clipper ‘Samuel Plimsoll’ is here moored on one of the most historic pieces of water in Britain, The Plymouth Cattewater, bound Plymouth for Australia.

Her anchor is hove short, sails shaken loose, Samuel Plimsol is in the final stages of taking on board the last of her emigrants and their and bound to sail with the first of the ebb tide.

In the time honoured phrase, “the ship is in all respects ready for sea“.

During the 19 th century Plymouth operated the most modern most humane emigration depot in Great Britain.

Aside from a geographic advantage and more so with the coming of railways, Plymouth had the most advanced [for the time], most popular, migration depot.

The Emigration Depot was demolish in approximately 1935 leaving only one building still  used jointly as The Pier Master’s Office and The Mayflower Sailing Club.

To reconstruct the old depot my principal sources were visits to the location, an aerial photograph of the neglected depot taken soon before demolition and a charming, very informative drawing made by an emigrant and which was published in an Australian newspaper at that time.

Samuel Plimsoll was built for speed as an iron hull composite clipper in 1873 at Aberdeen by W. Hood & Co, for the Aberdeen White Star line.

Samuel Plimsoll” is to be noted for her record runs annually from Plymouth, mostly to Australia then back to London, England.

As for Mr. Samuel Plimsol, it is no exaggeration to say seamen world wide today still benefit from Samuel Plimsoll’s lifelong campaign for sailor’s rights.

She eventually made 17 voyages with emigrants, returning with wool, racing her clipper ship sisters.

‘Samuel Plimsoll’ had very similar lines to famous ‘Cutty Sark‘ and her great rival, ‘Thermopylae‘ regularly racing them and proving herself a very fast ship.

This fine clipperwas christened and launched in the presence of Mister Samuel Plimsoll MP in who’s honour she was named, by Mrs. Boaden, wife of her first commander, Captain Boaden.

Her first voyage took 180 souls from Plymouth on 19 November 1873 arriving at Sydney in the very smart time of 68 days.

During the whole of her career under the Aberdeen house-flag, the only mishap Samuel Plimsoll suffered was the carrying away of a fore topmast : happily this was free from casualties.

This was the case with most of the well maintained Thompson’s green clippers.

On the occasion of this her only mishap a tropical squall carried away the bob stay, and down came the fore-topmast and main top gallant mast.

Samuel Plimsoll was in distress.

It happened that a Yankee clipper was in company.

This vessel beat up to the dismantled Samuel Plimsoll and sent a boat off with a message that she too was bound for Australia and would gladly tran-ship the passengers and carry them on to their destination.

This offer, Captain Simpson, then commanding the Samuel Plimsoll, declined with thanks, so the American went on her way.

In the remarkably short time of a long day of hard work the Aberdeen flyer had fresh masts aloft.

Then the Samuel Plimsoll settled down to make up the lost time.

Nobly the Samuel Plimsoll made her time.

One week’s work in the ‘Roaring Forties’ totalling 2300 miles, and she eventually arrived in Melbourne, 82 days out.

Some days later the Yankee arrived and her captain at once went to the Samuel Plimsoll’s agents and reported speaking to the dis-masted Samuel Plimsol in the Atlantic.

At the same time he commented on her captain’s foolhardiness in not trans-shipping his passengers.

“Is it the Captain Simpson sitting over there you are referring to?” asked the agent.

Extracted, edited from THE COLONIAL CLIPPERS by Basil Lubbock, Page 242

At a time when literally some 5 thousand families per year where being made fatherless because ships were being overloaded so lost in storms, Mr. Samuel Plimsoll became a renowned campaigner for sailor’s rights and safety at sea.

Mr. Plimsol was an ardent campaigner for sailor’s rights, innovator of the ‘Plimsoll Line’, a mark protecting seamen, which today appears on the ships of 164 countries world wide.

Samuel Plimsoll literally has made his mark, a great achievement, a truly great legacy.

There is an excellent award winning book on the subject The Plimsoll Sensation by Nicolette Jones.

Ask for details for your copy or visit my web site page Marine Art Prints https://www.frickers.co.uk/art/new-marine-print-gallery/

This is a name strange to lay upon the modern tongue.

For centuries, even long before Plymouth existed, the Cattwater at the mouth of the Plym river was the favoured anchorage in Plymouth Sound.

The name ‘Cattewater’ derives from water were anchors were ‘a cat-head’ or ‘catted’.

In old time wooden sailing ships anchors were as vital as they are today, maybe more so.
Anchors were and are big heavy beasts that if miss handled could seriously damage a ship, maim or kill men.

As ship design developed anchors came to be ‘handled’ via a primitive derrick, solidly fixed as one each side of a vessel just abaft the bow, and aided with a portable ‘Fish Derrick’.

Some ancient mariner, bit of a wag, pointed out these are like two cat’s whiskers; the name stuck, has become sea lore, part of the mariner’s language.

From Plymouth sailed voyages that have changed lives and our world beyond measure.

Your best value, buy from a dedicated artist- buy from a reputable, dedicated, established artist direct from my studio.

This painting is now a part of Plymouth’s legacy, being the only accurately detailed representation of this part of Plymouth’s lost history,  researched as diligently, as meticulously as I could manage and including by great good fortune a ship which sailed 17 times from Plymouth, the famous elegant, emigrant and wool clipper, the  “Samuel Plimsoll”.
Will this painting go to Plymouth?
That remains to be seen !

You could acquire or commission a painting like this.

By arrangement payments can be in instalments.

How much in my currency? Try our free XE Currency converter.

Credit where it is due, my sincerely grateful thanks go to : in particular thanks to the late Bob Brennan, enthusiastic proud Plymouthian, for his tireless research and encouragement.

To David Folley for the use of his facilities, Captain Tim Charlesworth of / and the Cattewater Harbour Commissioners, Ian Criddle of Plymouth Naval Reference Library, Nigel Overton Heritage Officer of Plymouth City Museum and Art Gallery.

Further afield, my thanks go to Alan Collie in New Zealand who provided information unknown in Plymouth from the 1884 WESTERN FIGARO newspaper including drawings.

To David Meale who’s ancestor Richard James Stead emigrated in the Samuel Plimsoll and kept a diary which includes a drama, a collision at sea during the voyage; and by no means least, to the Australian National Maritime Museum at Darling Harbour in Sydney.

All helped enormously and willingly, giving authority to this magnificent port painting “ Plymouth, Emigration, the Cattewater“.