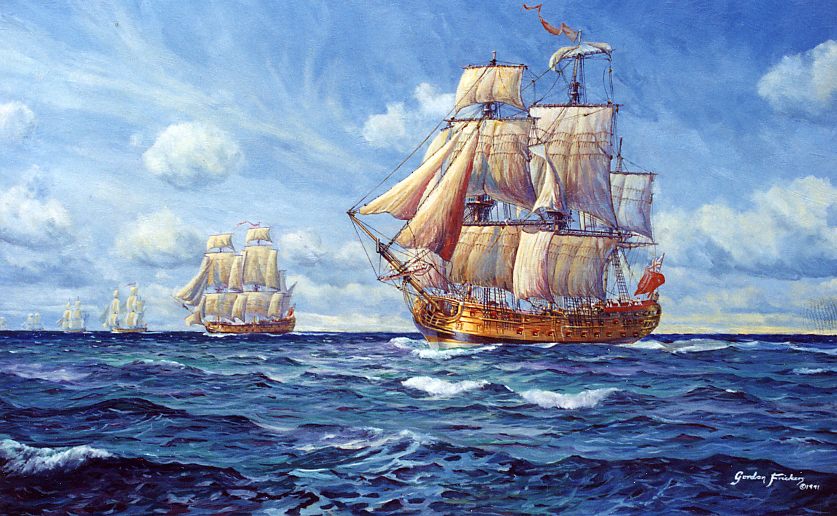 : Anson’s Centurion and the largest treasure ever taken at sea.

An early Frickers painting (sold 1991) and one with a very strong story.

Anson’s ship was the only one of the squadron to complete the most dramatic of circumnavigations.

A bit of the story which includes, but this only a fraction of the tale, the taking of the largest treasure of all time at sea.
It is said that 1/3 of the bullion in the Bank of England today came from Anson’s voyage, 14 wagon loads.
Anson and HMS Centurion returned after 4 years having been given up as lost, with sails made of pure silk, in the Bay of Biscay, sailing right through the middle of a French fleet in thick fog.

Anson’s voyage, the full story can be found in the excellent book by Heaps, Log of the “Centurion”

50 x 81 cm (20″ x 32″), original long since sold, astern in 1991 so this is not an advert, it’s a moment to share with you !
Before Nelson, Anson’s fame in England was second only to Francis Drake and yet now he is largely forgotten

.
The Centurion is the sort of ship people associate with Errol Flynn and with

Pirates of the Caribbean and yet her story is less believable than the movies with one slight problem, it’s a true story.
Hollywood could never write a script to rival Anson’s adventures with HMS Centurion, a very unbelievable yet true story.
The Chinese when HMS Centurion arrived in their waters badly in need of a refit, called him

.
Anson is also called ‘The Father of the Modern Royal Navy’ following on his time later as First Sea Lord.

By the way, back in the days when the NMM staff were very helpful and access was free, there was a very fine model of HMS Centurion in the National Maritime Museum (Greenwich, London) archive.
I was permitted to photograph (being a qualified photographer is useful sometimes) the model as the basis of my paintings of Anson’s voyage.
I noticed the interior of the model seemed to be ‘decorated’.
NMM staff put and endoscope into the model.
We discovered all the interior was made as it would have been when the ship was launched even down to the officer’s cabin walls having painted decoration, not unlike modern wall paper.
Yet, but for my curiosity, no one knew that.
Some model !!!
I’d love an excuse to paint more scenes from this voyage …

From the Facebook page Traditional Sail Worldwide, Roger Leach tells us there is a book named ‘Manila Galleon’? Thank you for mentioning this book Roger. I’ve not read this book although I do know a bit about the subject. A favourite target for buccaneers, said to be impervious to cannon fire. The Manila Galleon attacked by Centurion was typical of the type. I made a painting of the action (no photo available at present), which is long astern sold. Her people defended bravely but stood no chance against a custom built 64 gun British warship. At one point Centurion, her men very confident of the outcome, actually coolly ceased shooting to give the Spaniards time to put out a fire. I researched and found the book contains as Roger wrote, a great story, also an annotated list of the galleons sailing between the Philippines and Mexico from 1565 to 1815. Amazon claims : Manila Galleon by E. Van Wyck Mason, “For anyone in the least bit interested in maritime history this book is a classic and a ‘must read’ ” .

Hardcover $89, one available. There are rave reviews. 🤭⚓.

Frickers paintings, the choice of many distinguished people and renowned companies.

Gordon Frickers is widely considered a master of spectacular painting as indicated by his unusual  resumée.