It’s Connexion, the Anglo French journal today. Yet another journal carries a story of the living legend Robin Knox-Johnston, this time in France . 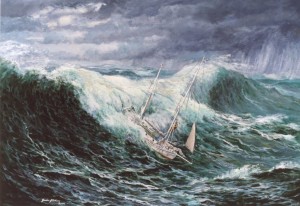 The famous marine painting “Roaring Forties” is a real piece of marine history, much reproduced by journals when writing about Robin Knox-Johnston and a very collectible limited edition and signed by the yachtsman Sir Robin Knox Johnston.

It was as you may be aware produced specially for and in close collaboration with Britain’s most illustrious yachtsman and master mariner, Sir Robin Knox-Johnston.

We had a brief, charming compliament recently re the beautiful Heritage quality marine print of “Roaring Forties”, one of those thing which helps make our work feel worth while.

I’ve been asked, I would paint the BI ship “Chintala”. ~ Chantala ~ I have a phone call coming in later today asking ?

I have painted quite a few BI ships including one for Robin Knox-Johnston who started his amazing career and adventures on Dumra.

At the Royal Western Yacht Club, an event that was one of the main reasons I am in Plymouth this week.

Today firmly wearing my marine artist’s hat and bright red sea jacket I attended the British Marine Federation South West AGM and if that sounds dull I can assure you it was not!

Order your  copy, signed by this superstar of yachting and Gordon Frickers, a numbered Presitige edition,

from this web site at http://www.frickers.co.uk/prints.html.

Robin Knox- Johnston, with out doubt Britain’s most famous most distinguished living sailor,  has gone on to create a list of formidable achievements not least being 3 times voted “Yachtsman of the year” and being knighted for his public services.

He’s been at it again, age 68, Robin Knox-Johnston sailed in the Velux Five Oceans Race, racing Saga Insurance, his daily blog was  an amusing, fascinating read.