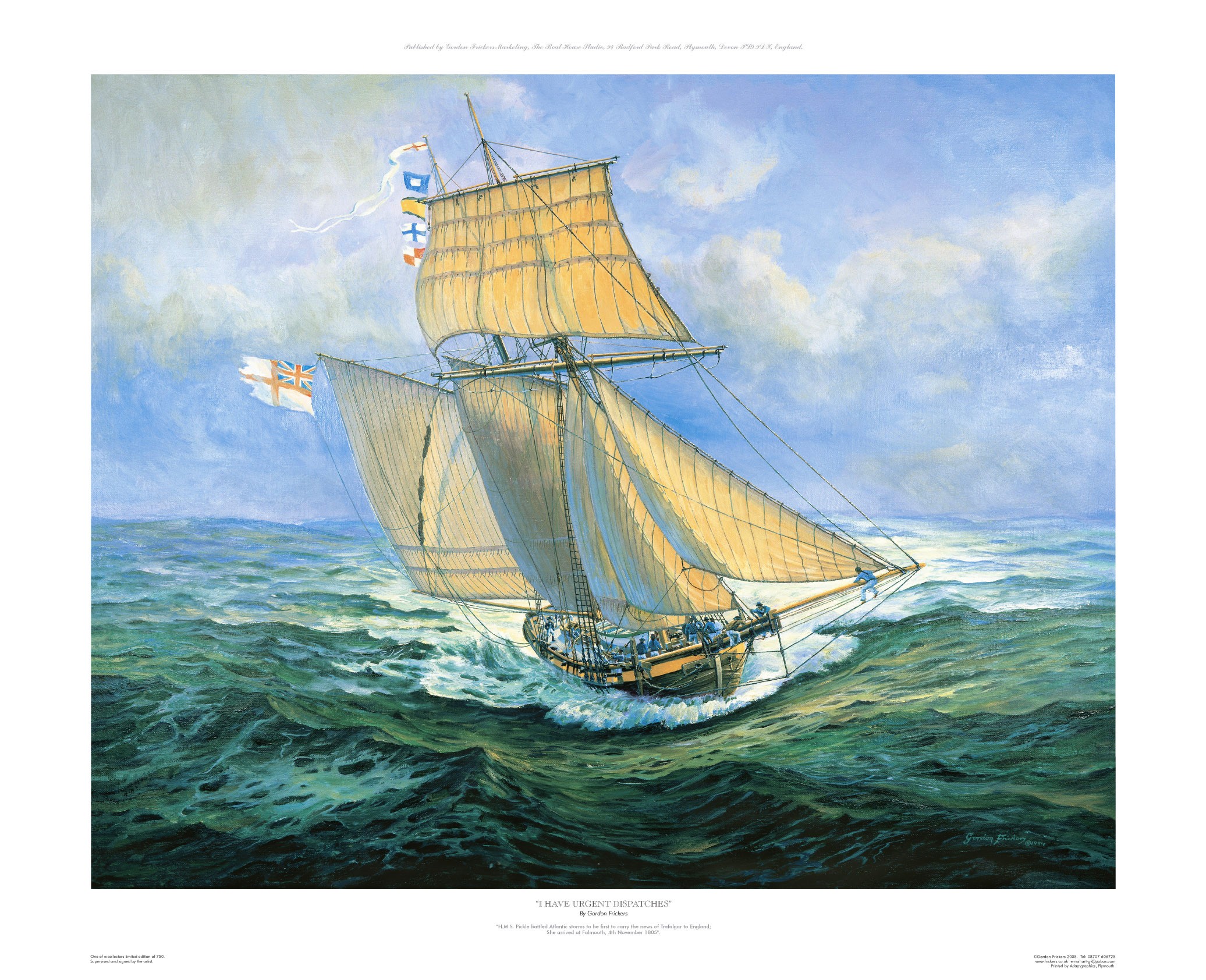 Drake and the Spanish Armada, a twist on a famous sea yarn for you.

Did Francis Drake play on?
When at Plymouth #Drake was given the news of the imminent approach of the mighty Spanish Armada did he finish his game of bowls?
Many people think the tale is unlikely.
But. 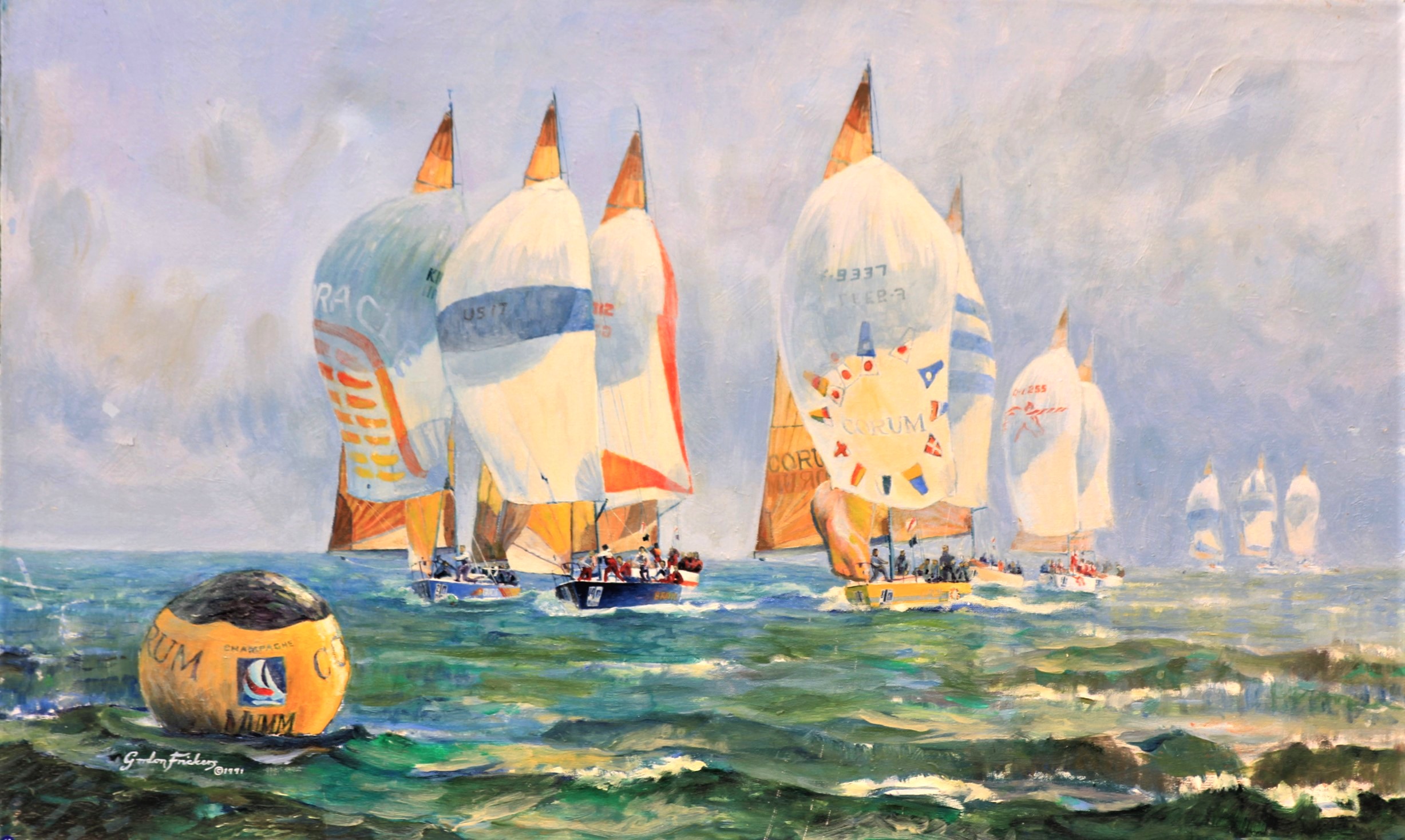 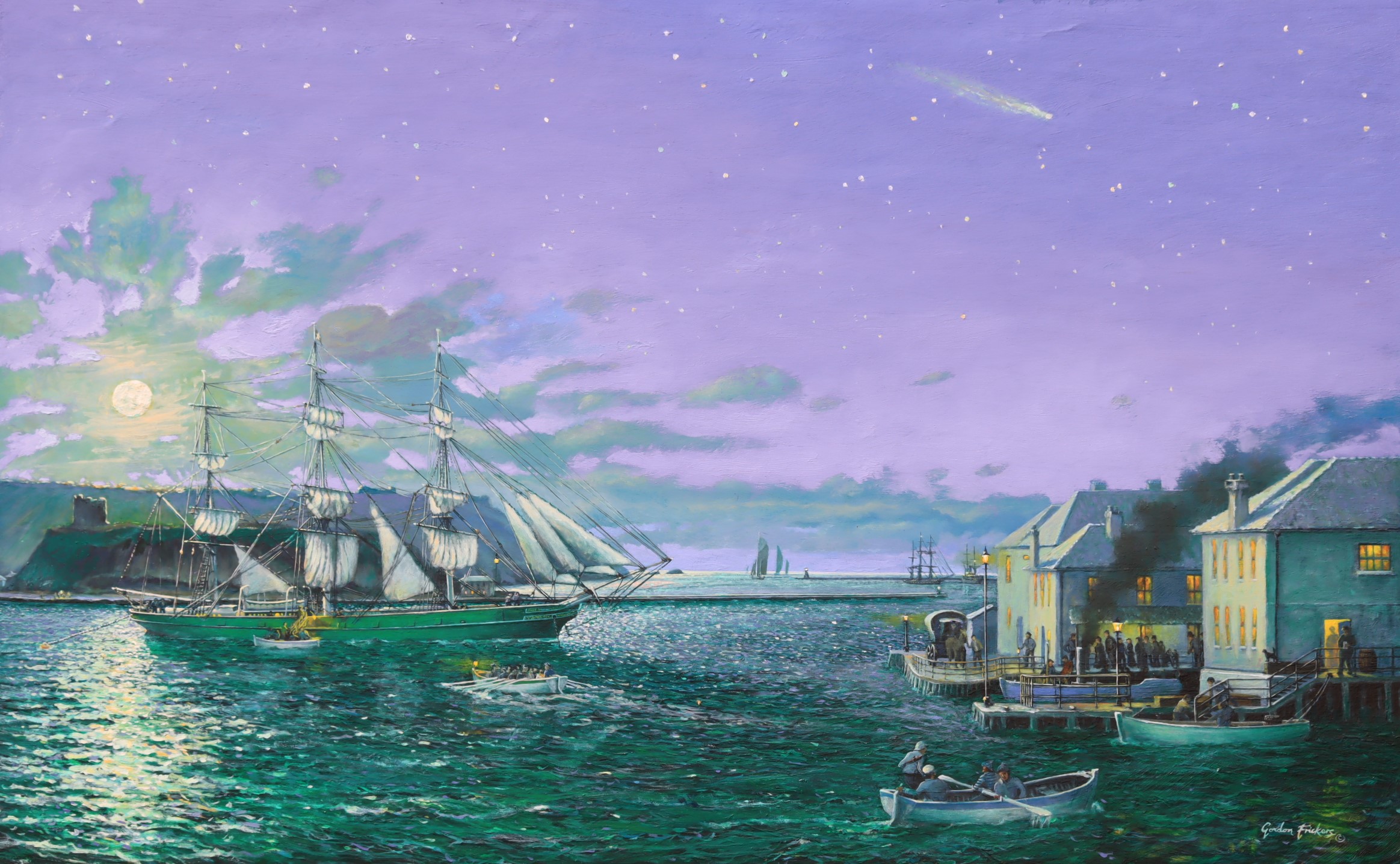 How many times have you watched a full moon rise, how many painters, photographers and film makers have attempted to capture those elusive moon beams and the so subtle colours of a night sky?

Moon light, zephorial light, attempted by many including some of the great masters, the great majority, unsuccessfully.

Recently, while painting moonrise over the ‘Haut Medoc and the Gironde Estuary’, ideas, inspiration began to form.

I found myself pondering a major repaint of my already applauded ‘Emigration, Plymouth’. 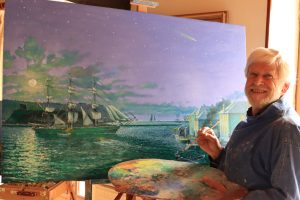 My wish is that someone buys ‘Plymouth Emigration’, this historic painting for the people of Plymouth City.

Probably not, after all the city of Chester missed out with the magnificent ‘Port of Chester 1863’ which went elsewhere to a private buyer.

I am reminded today of the many cruise ships it’s been my good fortune to paint. Classic #shipsandshipping , a classic cruise ships painting. #miamibeach and a cruise ship with an unusual story to tell, ‘Emerald Seas’ is beautifully shown here entering Government Cut, the final approach to the port of #Miami. https://lnkd.in/dCQhN9Q > 50 x 81 cm (20″ x … Read more 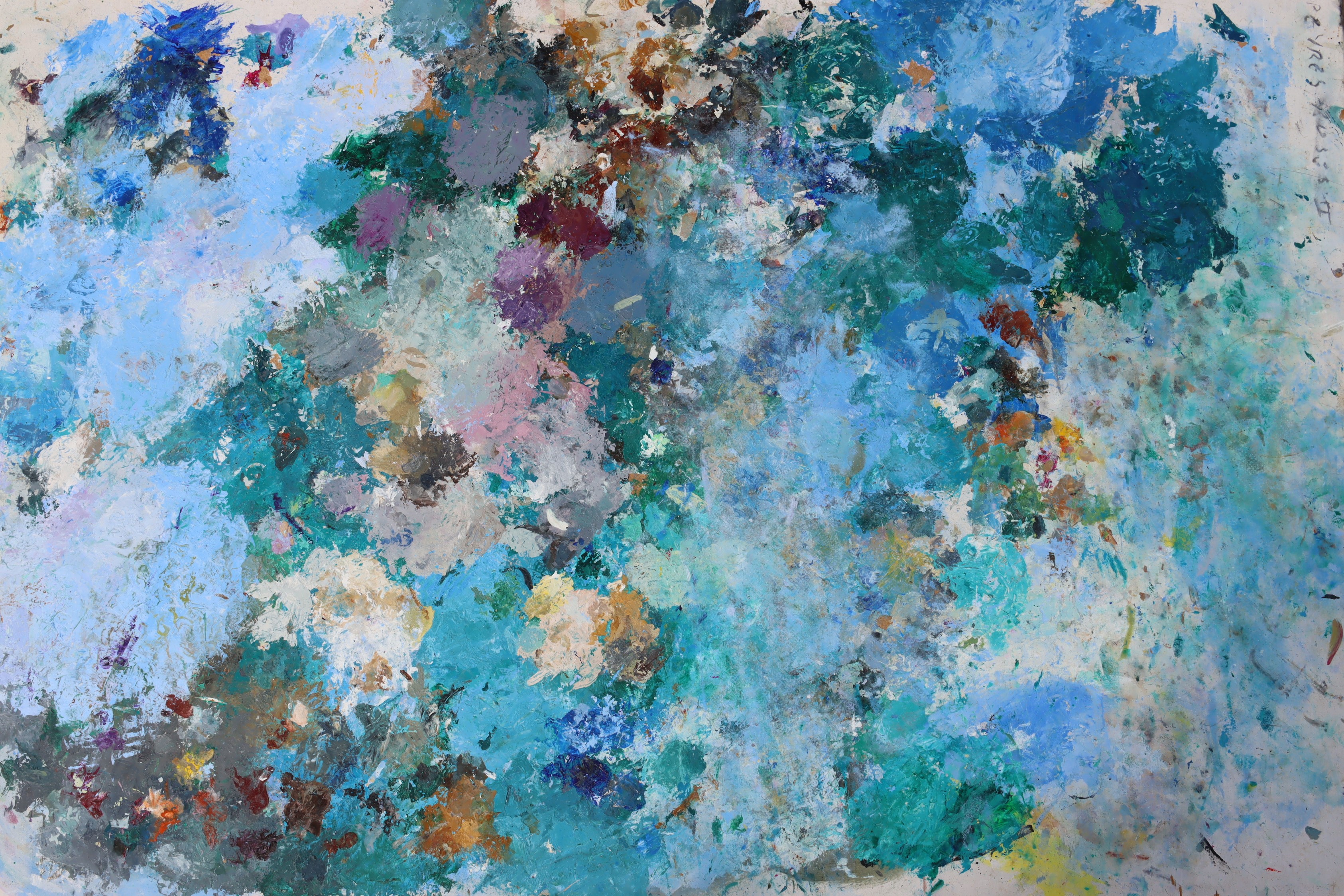 #Titanic‘s voyage was soon over, my two paintings sail on to become an addition to the brief life and long story, Titanic’s story.
Your Titanic “Plymouth Harbour” a palette offered for the first and only time, an investment opportunity of a life time.
Meticulously reproduced, this is the largest most prominent painting lost with the ‘Titanic’, a masterpiece commissioned by White Star Line. 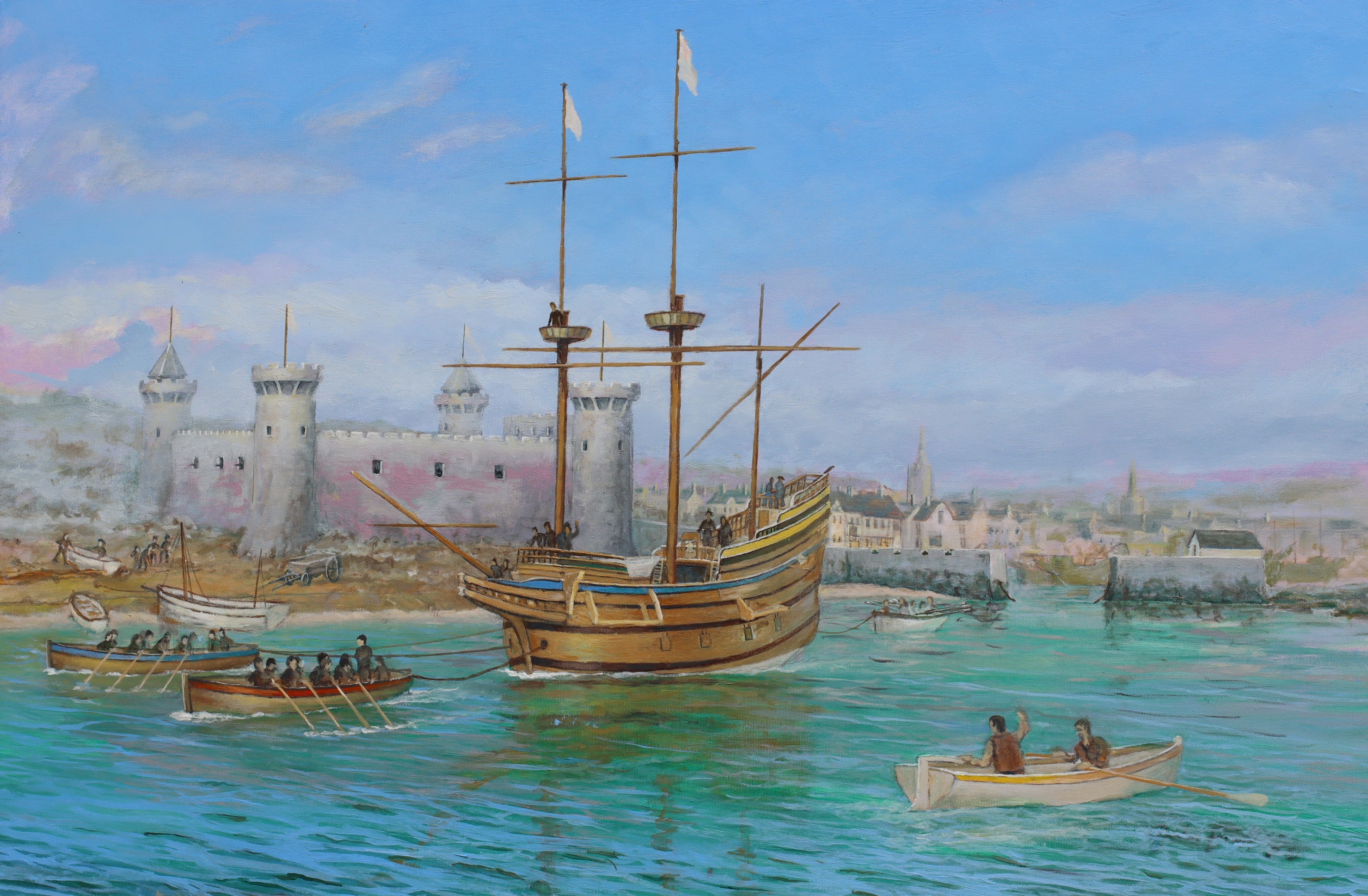 This painting of Mayflower Plymouth, England has been chosen as a subject for new video being made in the U S A by Frank Muller.
The video to be a blend showing some of how this painting evolved.

As I write this painting is now 98 % complete so another picture will follow on this one very soon. 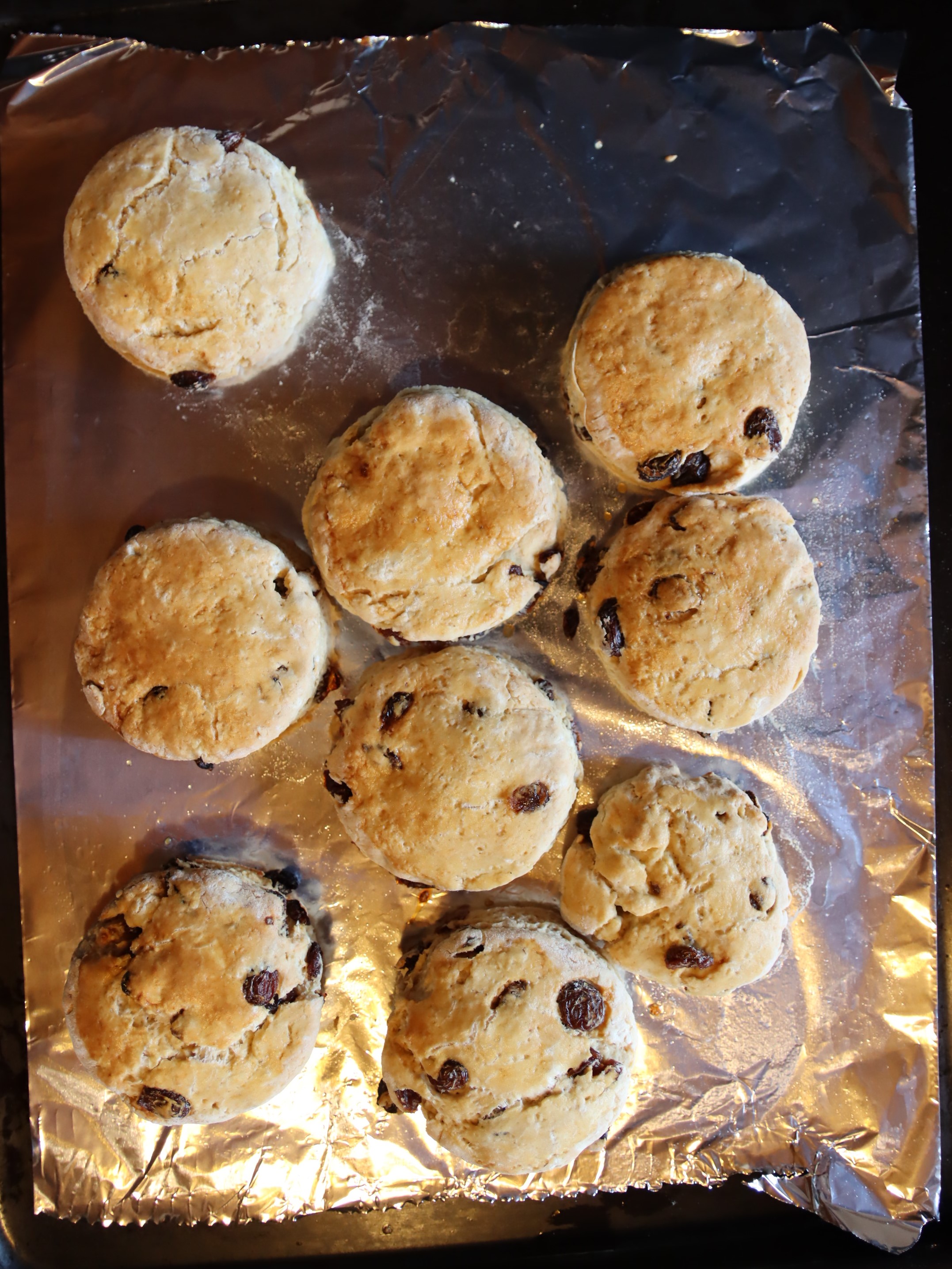 Scones are quick and easy to make; so I’m told.
That’s not quite my experience with making scones …
These, my third attempt turned out as a variation on Rock Cakes …
Maybe to much egg used?
Anyone know how ‘perzacerly’ how to make real Cornish Scones, which flour and other ingredients …?

“Gordon, My Father received his painting of Agapenor today and is absolutely delighted. Many thanks for sending it over. Kind Regards”
“My father was a retired Chief Engineer with the Blue Funnel line and the ‘Agapenor’ was his first ship so it is lovely to see. 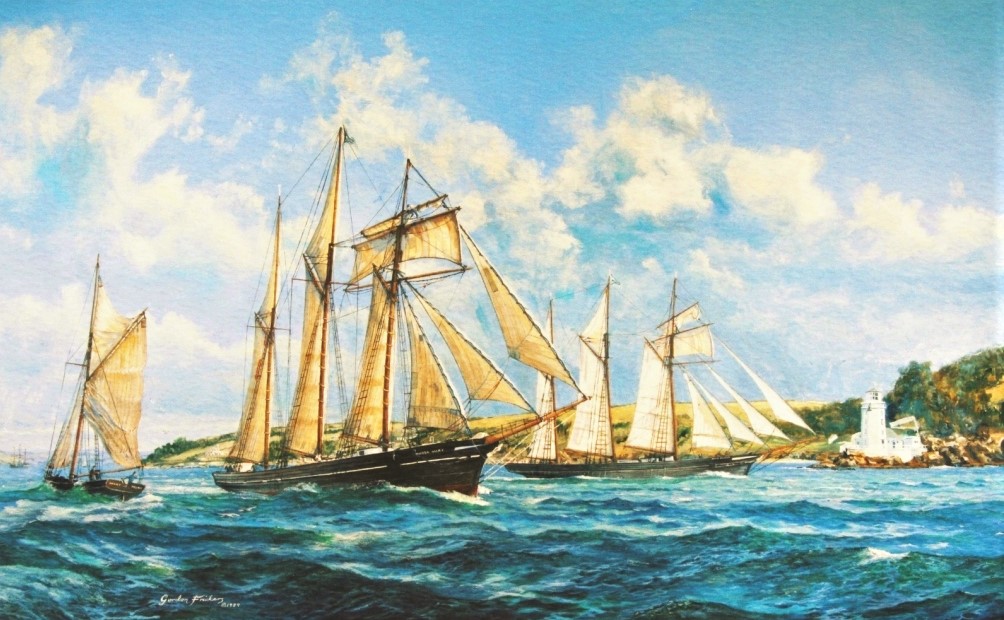 Painting schooners is always a pleasure for me, more so in this instance. 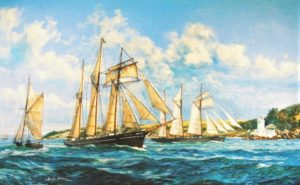 The beautiful working Schooners Racing, Rhoda Mary and Katie Clewett commissioned by Frank Trebilcock, a descendant of the families who built the three renowned vessels two schooners and a sloop.
This painting is now owned with pride by his son and definitely not for sale although fine art prints are still available.