Skip to content
H M Sloop ‘Racehorse‘ my painting on my page “Nelson’s Arctic Voyage“, https://www.frickers.co.uk/…/the…/hms-racehorse/ has raised some interesting points on the excellent Facebook page ‘The sailing frigates, ship sloops and war brigs 1620-1870’.
One gentleman wrote :
Lovely picture with beautiful storm details such as the slackened haulyards for the jib. It’s a brave man standing on the jib boom and bowsprit cap.
If I had to try to stand there I’d try to wrap an elbow or upper arm around the forestay – much more solid and reliable than anything else and you can still use that hand. 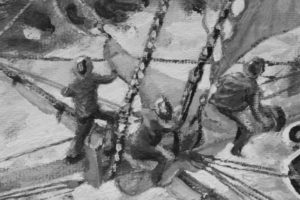 I replied :
I’m with you on that however, many accounts write of the remarkable risks the men of those times took as daily work.
Times change, the old boys who taught me, the very last British men who worked commercial sail without engines used to say and I quote verbatim, “one hand for the ship and one for yourself; if in doubt f*** the ship !“

Another gentleman wrote :
Thanks for your note. I am very familiar with the ship, because I included her plans as redrawn by me in my 1986 book “Early American Ships,” and, yes, she was originally built in North America.
I replied :
that is interesting because according the the British records she was a French prize built at Nantes, Brittany, France, not far from where I now live.
She was according to British records, an 18 gun privateer, ‘Marquis de Vaudreuil‘, officially taken into the R N on 28 April 1757 and refitted for the R N at John Randell’s yard, Cuckold Point, Rotherhithe, East London.
Officially :
named “Racehorse” by Admiralty order 5 May 1757.
We know a lot about HMS Racehorse per detailed Admiralty Progress Books.

My principal sources are Mr. P. Goodwin’s new book “Nelson’s Arctic Voyage” from page 40 on and the Museum of Nantes.
If you don’t already have a copy of the book, may I recommend it to you?
Probably your “Racehorse” was a different vessel, same period, same name?