Skip to content
Also sometimes called “The Last Buccaneer”, “The Great Pirate” was the name the Chinese called HMS Centurion.
Centurion captured the richest prize of all time and so much treasure it took 27 wagons to move it to the Bank of England. 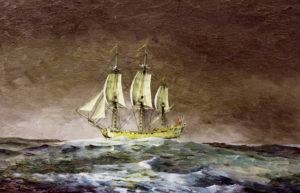 In fact Centurion was not a pirate, she was a royal ship under orders and unlike some pirates, prisoners where well treated.
I’m reminded by a post on Facebook by John Lieb on Ships of the line, the sailing battleships 1600-1860 so I am sharing here with you.
She was the first European warship to visit Chinese waters …
For the full story which is hard to believe.
I recommend the book “Log of the Centurion”, by Leo Heaps, ISBN 0 246 10581 X. Based on the original papers of Captain Philip Saumarez, who sailed with Anson.
I bought my copy in 1974 and still treasure it.
For my paintings, (all long since sold 😶, accessible and described though on my web site page https://ww the National Maritime Museum at Greenwich, www.frickers.co.uk/art/marine-art/war-ships/), an example shown here, I was permitted a detailed examination of the marvellous model in London.