Skip to content
Arrived safe in Florida USA, my client is happy to have you know he wrote
“Dear Gordon,
I got it safe and sound! 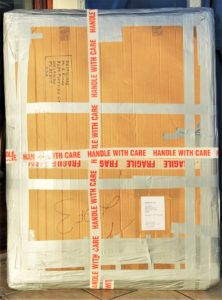 The painting is magnificent and stunning.
Each aspect of the painting exceeds my expectations.  While your paintings are beautiful to look at over the internet, the actual painting has a warmth that can only be felt by seeing the real thing. I also had a reaction I had not expected. My father passed away from a stroke when I was seven. He loved to paint and I remember watching and being around him while he painted. When I opened the box and revealed the painting, I got the smell that I had not had since I was seven. I guess it was both the varnish and paint but it was warm and wonderful.
Thanks for a great experience,
Eric
P.S. I’ll contact you when we have it installed at the new house. Maybe we can get a Skype session and I’ll give you a tour of its new home. I looked at the flags on the stern and it spells out MQKJ. Any significance?

Have you ever thought, “I’d love a painting like that one?”

MQKJ explained below…
MQKJ, while researching for our new painting I visited my mate Geoff who owns the first of these commissione by his now departed Father Frank, “A Dispute Settled“.
Since his Father commissioned that painting back in 1989, Geoff has acquired several ‘naive’ paintings of ‘Rhoda Mary’ .
This one clearly shows her making her number,  MQKJ.
It was quite common practice for ‘pier head’ artists to include any detail that might help identify thus sell their painting.
‘Rhoda Mary‘ might well have flown  MQKJ , after all, she spoke with the ‘Mary‘ and aside from the St Anthony’s Point light house, there was and still is a coastguard station which would have been in plain sight all be it to the left of our scene on Pendennis Head to which she may have made her number.