A major event, THE festival of Lanterns.
If you possibly can, visit this fete on show for the third and last time at Gaillac.

This is nothing less than Gaillacois Tarn representing all France to China and vice versa.
Previously the Chinese have always chosen major cities, Toronto, Hamburg, Boston and San Francisco USA and so on.

This year this festival, unique in Europe opens 1 st December for 2 months.

The mayor of Gaillac made a brilliant, inspiring speech.

The evening included lavishing wines, foods and a disco on guests

He was explaining how during ‘tough negotiations’ he convinced his chinese opposites that Gaillac, population 30,000 is an important town worthy of attention with all they need including the best wine in the world.
Mr. Song replied, the negotiations were tough and he is very pleased he and his team chose to be at Gaillac.

He said the festival is about cultural exchange, mutual friendship, co-operation, competition and exchange of ideas. 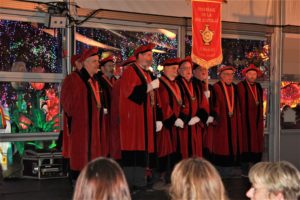 THE Ceremony was closed by some exceptionally fine singing by the ‘fathers of Gaillac wine’ who were introduced by the mayor as ‘dinosaurs.

This was a double joke as China has the biggest best fossil beds in the world, hence the unlikely inclusion among the exhibits of that favourite of children of all ages, dinosaurs. 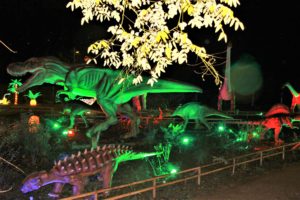 Two exhibits represented the Chinese interpretation of Gaillac.
One I am delighted to report, was inspired by, based on my 2 m painting “The Port of Gaillac 1863”.

I painted this because as I realised some years ago, on a ‘needs to be done’ basis, it had to be done.

This task entailed much research which you can discover on my other web site, the ‘wine and landscape’ site www.artfrickers.com. 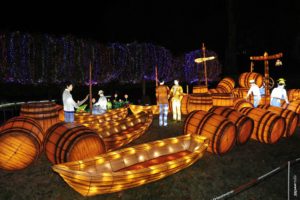 For long centuries, the port was Gaillac was the fertile West Tarn’s gateway to the world.

Today this department is judged by many including readers of the Anglo-French journal ‘Connexion’ to have the highest quality of life in all France.

My sincere congratulations go to all who worked so hard to present this very fine festival.