“What was the significance between Red and Blue?”

Flags are a complex subject with a long history.

To fly an incorrect flag, one you are not entitled to, is still punishable by law. Both flags he mentions, red and blue, have a long history.

In Nelson’s day Blue was used together with red, white and yellow to indicate the zone a ship thus the admiral in command, operated.

Many a would be marine artist has shown a wrong flag !

Yellow indicated a retired admiral, that is, one not at sea on active service. Today the ‘Blue’ is a civil flag used by some nations affiliate with Great Britain, usually with a symbol to distinguish the nation, Australia, Bermuda for examples.

The blue flag is similarly used by organisations like Trinity House who are responsible for all channel markers and light houses around the British coast.

A few Yacht clubs are by royal permission able to use the blue flag as are their members, the Royal Plymouth Corinthian Y C of which I used to be a member being one. The red has an even longer history.

A red flag used to indicate no quarter until the battle is won. Black meant no quarter, period.

Red with the national flag in it’s top corner came to be the English, later the British flag, flown by all English/British ships and used by the R N. Around 1850 the red became the civil flag used by all British ships that did not have a permission to fly a white or blue.

The R N adopted the white at that time.

Known in the merchant service as ‘the red duster’ because to save money it was often used until it fell apart, the red is still flown today by most British small craft and most of the few remaining ships of the British merchant service.

I choose to fly a red on my boat with pride and to honour those who in part taught my basic seamanship by some of the very last British seamen to have worked under sail without an engine.

Their attitudes and knowledge still influence my marine paintings today giving many of them a reality most other paintings lack.

My illustration here comes from my painting “I Have Urgent Dispatches’ [available as a signed print from my web site] and shows a signal use in R N 1803 code. 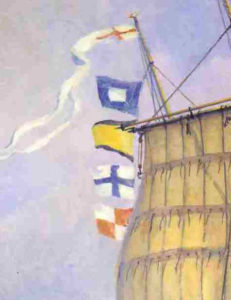 That code invented my Admiral Popham, could convey over 3,000 messages.

Popham’s code was one of the innovations that helped the British at that period gain and maintain superiority over their enemies and it was the 1805 code and a white ensign used by Nelson’s fleet at Trafalgar.