Back in 2001 I had the privilege of painting the young Olympic gold medalist Ben Ainslie to help raise funds for the RYA training schemes. Dark days, the blackest period of my life, the painting remains unsold. A pity, I’d still like to see the RYA youth traing scheme benefit and the painting find a good home. I did though quickly appreciate the talents of Ben Anslie, talents he continues to live up to. 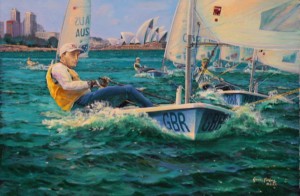 Those were for me, dark days, a divorce I did not want, the blackest period of my life, consequently I missed the best opportunity to sell this unique action portrait painting, it remains in my collection, rarely used, unsold.

This is the first win for the team since securing victory on home waters in Portsmouth last summer, and Ainslie sees the result as evidence that the team is finding its form.

“We have a big team of designers, boat builders and support staff back at home working very hard for us and they want to know that we can win this thing,” he added.

Retaining its place at the top of the overall third place went to the Emirates Team New Zealand. ORACLE TEAM USA is in second having closed the gap to just six points

Full results can be found on the America’s Cup website.