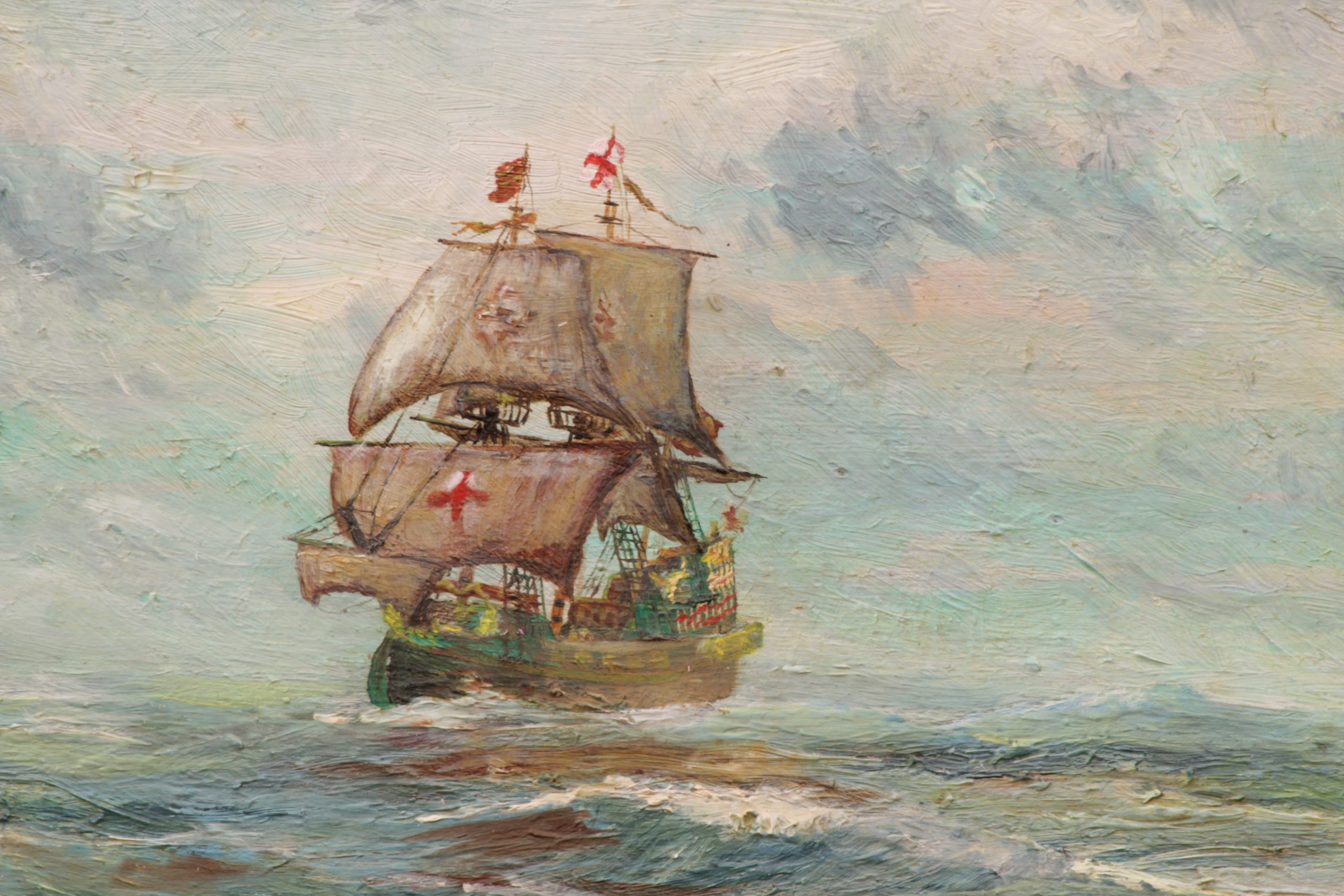 Drake’s voyage between 1577 and 1580 made his reputation and a fortune.

The Golden Hinde voyage remains one of the most extraordinary adventures of all time combining many of the ingredients of a best selling story.
Francis Drake was a Devon man who captained the “Golden Hinde” (pronounced – ˈhind’) (or Golden Hind), an English “Race Galleon” type of ship out of Plymouth England to become the first Captain and the First English captain to circumnavigate the globe.

During this remarkable feat Drake’s sailing master (navigator) was listed as Moses the Jew.
It is well known Jews were banned by the Roman Church from many trades in Europe and owning land at that time.
Consequently Jews tended to take to more intellectual occupations which included doctoring, banking and chart making.
Plymouth was at that time a hotbed of English seafarers demanding better ships, better navigation better everything.

Plymouth men where real men whose sails were seen it was said trading in every port in Europe and many further shores.

established Drake’s reputation as a seaman, discoverer, wise daring and forceful leader, corsair and according to his enemies- dread pirate.
Even in 1996 while researching at Cadiz I was told Spanish mothers in Cadiz would hush irksome children with “hush or El Drako will come”… The Spanish also called him El Draque, meaning “The Dragon.”
My own memories of Drake and the Golden Hinde are more positive.
The Golden Hinde replica was destined to follow Drake’s route around the world and left Plymouth in a blaze of publicity.
As mentioned I was studying at Fal Tech at that time and the following lunch time being a beautiful day I took my sandwiches to the quay to site astride a bollard and enjoy the sights and my little lunch.
There rocking gently at her anchor was the Golden Hinde!
Curiously, she had put into Falmouth due to bad weather exactly as had the original Golden Hinde!
Some 10 years later when cruising a Wayfarer (no 6778) my crew and I were permitted to board and to explore the beautiful replica, again the location was Falmouth Cornwall.
The replica Golden Hinde was researched designed and built by the finest authorities of the time including men who had served square sails.
She was built by Hinks of Appledore who had built previous replicas including a “Mayflower” later gifted to the United States, all fine traditional craftsmanship, now passed into history.

Hence the inspiration for this lovely early example of The Art of Gordon Frickers.

was typical of a new breed of (relatively) fast manoeuvrable English sailing ship; she was not a war ship in the modern sense but was well suited to warfare in her age.
Originally known as the Pelican she was renamed by Drake in 1578, as he prepared to enter the Strait of Magellan calling her the Golden Hinde to flatter his patron, Sir Christopher Hatton, whose armorial crest was a golden ‘hind’ (Old English for a female deer).
Hatton was one of the principal sponsors of Drake’s world voyage and Drake had executed for mutiny one of Hatton’s protégés…
Drake’s strategy worked, Hatton was rightly pleased and would other wise probably have remained just another obscure person but for the immortality Drake and the ship Golden Hinde have bestowed upon him.

Drake’s piratical conduct on his voyages was unofficially encouraged by Queen Elizabeth.
This was partly because Spain tried to exclude other countries from the half of the world the Pope bestowed on Spain, a claim which failed to take into account the likely reactions of other catholic nations and as for the Protestants well!
On 1 March 1579, the Golden Hinde took the Spanish galleon Nuestra Señora de la Concepción, which had the largest treasure captured to that date: over 360,000 Pesos.

The six tons of treasure took several days to transship.

He then came across the vast unknown Pacific 3 times narrowly escaping ship wreck, reaching the Cape of Good Hope on 18 June 1580 and Sierra Leone on 22 July.

On 26 September 1580 the Golden Hinde given up by some as lost sailed into Plymouth Sound and anchored in the Cattewater Harbour with only 56 of the original crew left alive aboard.

herself went aboard the Golden Hinde when the ship was moved to Deptford on the Thames to personally bestow a knighthood on Drake.
Queen Elizabeth’s share of the treasure came to almost £160,000: “enough to pay off her entire foreign debt and still have £40,000 left over to invest in a new trading company for the Levant.
Her return and that of other investors came to £47 for every £1 invested, or a total return of 4,700%.”
After Drake’s circumnavigation, the Golden Hinde was preserved for public exhibition in Deptford.
This is probably the earliest known example of a ship being maintained for public display because of her historic significance.

for nearly 100 years before she eventually rotted away and was finally broken up.
The table in the Middle Temple Hall (in London) is said to have been made from the wood of the Golden Hinde, as is a chair in the Great Hall, Buckland Abbey, Devon.
Sir Francis Drake was not laid up for many more years.

Drake’s illustrious career included becoming a royal favourite, an good Mayor of Plymouth and leaving a reputation for protecting England unrivalled today except by Nelson, Winston Churchill and The Few.

The only marine artist whose paintings have been honoured by invitation to exhibit in the European Parliament is Gordon Frickers.
He created a one man show of 35 paintings (May 2011), an impressive addition to his list of exhibitions in other prestigious venues in Britain and Europe.