Drove north to the farm near Fougers, nearer, Fougerolles, driven by several necessities.
The painting I most wanted to bring south, “Going for Gold”, Ben Aynslie at the Sydney Olympics.
I wish to re work this very unusual portrait of Ben Aynslie. 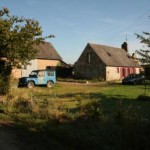 I’ll tell you more of why in a future blog.
Ben Aynslie, “Going for Gold” was painted under licence from the British Olympic Association in 2000/1 with the full co operation of Ben Aynslie and Restronguet Sailing Club at Falmouth.
Maybe you know the British Olympic Association is the only British charity whose copyrights are protected by act of Parliament?

The farm is going to be sold this year so I must shift all my gear but to where?
Plus I fancied another look at Saint Malo and its pleasures and that is another story!

Had a frantic 4 hours at the farm sorting “stuff”, furniture art equipment etc,  before fog closed in, very tired after. Don’t think I am destined for a career as a removal man!
Found some more books, not all the ones I most wanted and the local cat is missing (not mousing) so I also found much damage to papers and soft furnishings by mice in particular a new duvet ruined.
“Going for Gold”, Ben Aynslie at the Sydney Olympics, I could not find. After a hard struggle I got to the back of the store and to my relief there it was.

Mean time, what future for my other meagre possessions left at the farm, loose them or where can I store them?