The South of France was hit heavily by snow yesterday , over 3″ in places.

Some French are saying drivers in the South of France  are upset by 2 days of rain, this snow is causing panic, catostrophy! 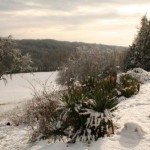 The snow arrived at Castelnau de Montmiral and Itzac during the night so what are the roads like?

Last night French TV devoted over 1/2 an hour to showing the effects of this climate change on the South of France. Some pics were pretty although the mountains threaten avalanches,  others not so pretty of numerous and some quite serious accidents.

This morning at Castelnau de Montmiral we have snow for the first time this year, second time in a few days. Can you figure that out?

I am assured this is a rare event here.

I find driving conditions are treacherous. 20 KPH (about 15MPH) is fast enough!

My car went into a slide while going down hill from CdM at 20 mph. Very gentle braking was ineffective, gently applying  the hand brake brought her back under control. En route near le Verdier, a  hare dashed out of a field. The animal was fleeing a dog and easily out paced my car!  I had wheel spin going up hill to Itzac.

Tomorrow I am scheduled to drive some 550 miles to Brittany and Normandy. I recall my dear Ol’ Dad’s advice, avoid driving over the Christmas vacation, January and February…

The plan is to collect some frames and a unique marine portrait painting I created in 2001 under licence from the British Olympic Association, of the Olympic athlete Ben Aynslie at the Sydney Olympic games where Ben Aynslie  won his first gold medal sailing in the Laser class. More on that in a future blog, soon.

Currently all is in store on a farm near Gorran. The farm is to be sold so I have to shift my gear soon, the little that is left from the wreck my former life at Plymstock, Plymouth, but to where???

Anyone got some storage space?

More immediately, what is tomorrows forecast for West France? Is this proposed drive a happy prospect?