A white Christmas, well almost, we eventually had 3″ of snow on the 26th. 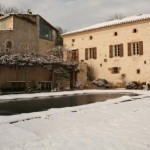 The snow lasted 3 days by which time temperatures had risen to 16C.

The roads were not as dangerous as they might have been because of the quick thaw. However temperatures are back below zero and so is the black ice…

Meantime after a mild fever over new year, I am back in the studio and working on ideas for  exciting and worth while painting in 2009.