Gordon Frickers has an engagingly interactive, light hearted, immensely knowledgeable and often surprising style as a speaker and lecturer.

Examples include, he gave a series of adult winter evening classes, at the Swarthmore Centre, Plymouth, on Marine Painting and another on “Nelson as a Role Model”.

Gordon can speak knowledgeably on many subjects including various forms of painting, art history, marine art, and wine villages of France.

He has entertained as variously as Round Table Clubs, Yacht Clubs and taught primary children opening his talks with lines like “how would you like to know something, not difficult, about drawing and painting that your parents don’t know?

His style is approachable, empathetic, directly involving the audience when possible, the talks usually illustrated often with examples of originals, he has an international perspective.

You can reach him via our Contact Us Page.

On-board Cunard Line’s flagship  Queen Elizabeth 2, as a “Celebrity Guest Speaker” he was described in the daily news as “The Renowned Marine Artist“.

He has been interviewed many times on radio particularly by Gordon Sparks of Radio Devon.

A further example, appeared on National TV  interviewed in Nelson’s cabin on board HMS Victory speaking about the commander of the famous if unlikely named  HMS Pickle [the Trafalgar Messenger] for “The Boats The Built Britain” series.

Art and the Mariner 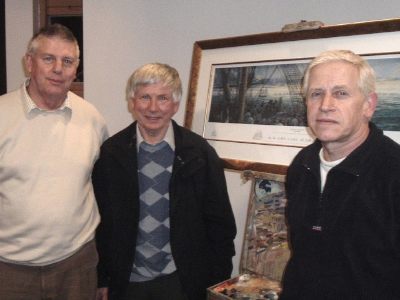 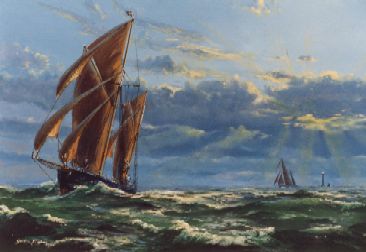 Gordon’s interest in marine subjects began in his infancy.
He later trained as a boat builder, learning his craft at Falmouth Technical College.
He still practices his skills in construction, maintenance and restoration of craft.
His love for boats and ships can be seen in the art work which he produces.
He claims to ‘paint for people who really understand the sea and the unique qualities of ships and boats’.
Nothing better exemplifies this than his famous painting the “Roaring Forties” commissioned by Sir Robin Knox Johnson showing the “Suhaili” in storm conditions.
More recently his involvement with the Trafalgar 200 celebrations and his paintings “Trafalgar Dawn” and “Urgent Dispatches” show his talent in being able to recreate historical events with accuracy and sense of atmosphere.
Of local interest is Gordon’s painting of “Tectona“, the former training vessel of Plymouth’s School of Navigation.