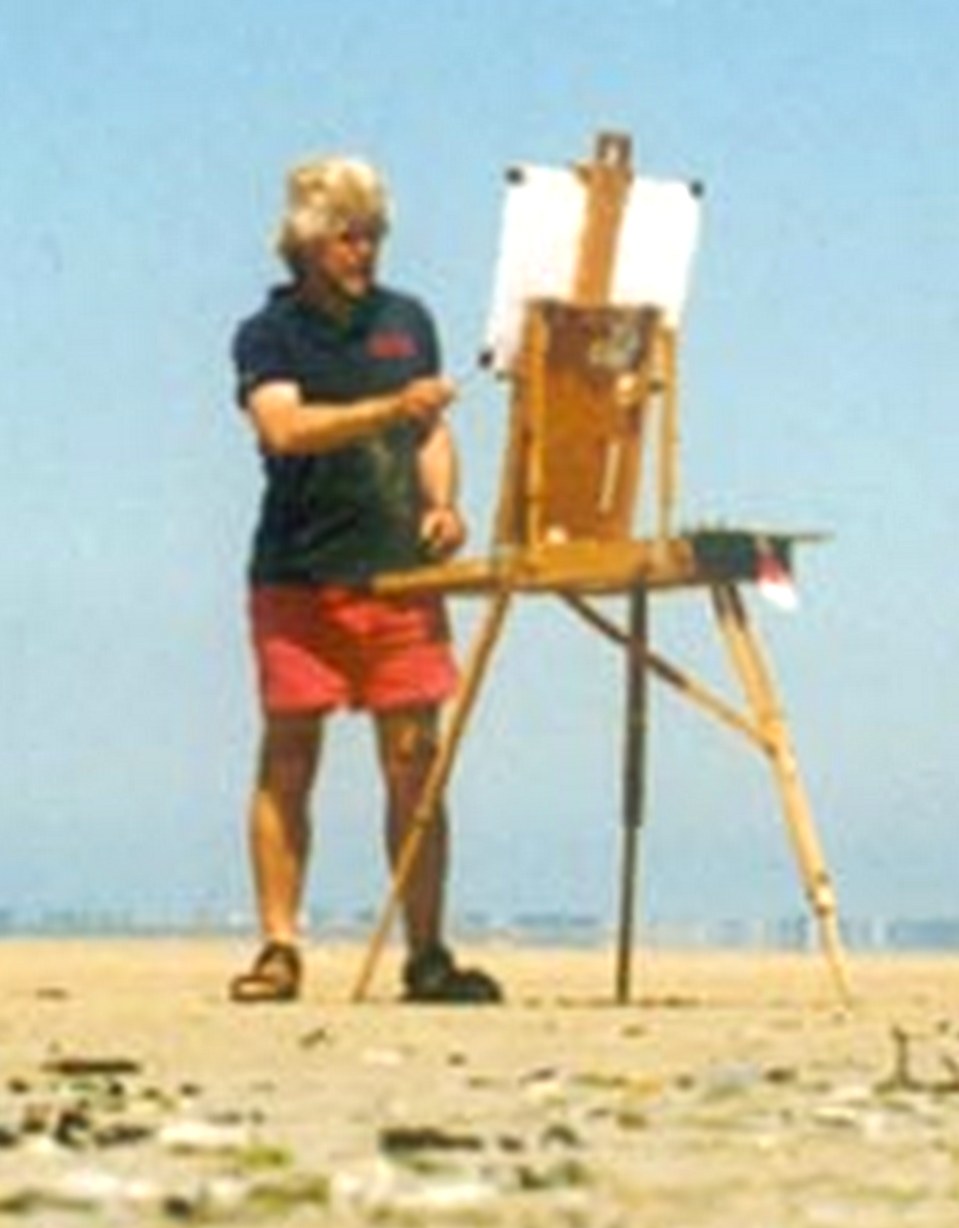 AMB is a very talented person who has been a real friend, still is, since my Medway College of Art days back in  1969 and has asked to remain anonymous

The following was kindly written by a poetic German friend who lives in Plymouth.
She came to me with an architectural problem relating to her proposed house extension & so was destined to become Vera Lees one of the first in England to see my newest ‘Famous Wine Villages of Bordeaux’ paintings.
The following is in her own words her spontaneous reaction.

Last night was very special.
Your new collection of paintings is a treasure, of beautifully haunting ambiances.
It was a journey I shall remember.
You must find a way of marketing yourself including the quest of a very personal “vision”.
I think the artist’s thoughts and background matter and enhance an exhibition.

I could write an article to give credit to your paintings since I like them so much.

I am looking forward to seeing you up there among the best.

“Words will never do these paintings justice”

Frickers will strike most people as very sociable and certainly articulate.

He does not only entertain but also informs you in an engaging way about topics he knows well.
Those include sailing as well as painting.
He will present them up in such a manner that you will be utterly mesmerized and keen to deepen the discussion which by then will no doubt be of a philosophical nature without your ever being awed by his keen intellect.

I remember one such talk on his unique colour perception which was discovered rather late in life by his art tutor and mentor the venerable Francis Pratt at the beautiful bastide village of Castelnau de Montmiral.
He has a different colour experience to normal people seeing

Frickers reds and blues are perceived differently to a colour normal person.

In turn this effects how he sees greens and some other colours which he literally sees as being changeable, inconstant from moment to moment.

To explore these & other issues in depth he decided to courageously ignore the considerable expense, go for it, follow up on work & ideas developed by earlier visits, to France but frozen by a personal tragedy that is now were all dark days belong, past history !

He revealed the journey he underwent one Sunday evening in taking me into his modest studio/bedroom.
I did not know what to expect remembering mainly his very fine ships and seascapes.
The Plymouth Evening Herald, Western Morning News West Briton and other regional newspapers followed his painting and would bring out an article every few months on different commissions.
However, this was a land locked quest.

he often got up at the crack of dawn to capture the mists before they were burnt off by the heat & sometimes finished after dusk.
Examples being at the valley of Sauternes were the brief, damp mist causes a vital mould which gives this the most exclusive & expensive of white wines, its unique taste.
Frickers felt it essential to capture a record of this sort of distinctive moment of light, mist & embryonic wine.

In fact on another occasion whilst at St Briac at the exact centre of the region Entrée de Mere, rather than miss the first light, he jumped out of a first floor window because the hotel he was staying in was locked up completely for the night.
He had left his house key outside in his car but was not to be stopped by such a trifle…

At other times he was out in the open painting in 37 to 45 degrees Celsius valiantly finishing his landscapes.
He had to be quick to capture a sunrise or a sunset.
You find an astonishing immediacy reflected in his work.

One time a massive hailstorm caught him out at the near completion of a lyrical mountain scene.
The threatening sky was there from the start.

Frickers was too absorbed to analyse what the sky fore told.

He only focused on the incredible effect that sky had on the shape & colours of the far mountain range.
The last part of the work was finished at a record pace as the sky quickly darkened & thunder rumbled & boomed.
Barely in time did he pack his gear & huddle in his car as hailstones the size of eggs broke branches & threatened to smash his car windscreen.
The drive back was through a debris strewn blasted countryside.
Back in the village he saw shattered windows, broken tiles; it looked as if the Mafia had paid a grudge visit!

The paintings there of vineyards, churches, villages,

The ambiance is often richly evocative of dreams with his skies and fields the sheer variety of approach and colour treatment is stupendous.

Nevertheless the whole does not lose its cohesiveness and harmony.
Where one might expect greens one finds warm ochre, red and orange tinges.
First and foremost Frickers did leave his preconceptions behind and painted with his eyes wide open and ultra-receptive senses, guided by his intuition and soul.
His learned colour normal language was switched firmly “off”.
It was partly the unexpectedness that drew me in.

But as the paintings evolved, shown in chronological order, I began to admire the swiftness and assuredness of the development of his style.
A couple of senior teachers showed him their admiration by telling him that he had found what they have been searching for all their life.

One is like a sketch but you would not change anything it is so alive.
Yet others have the quality of an old masterpiece in accomplishment of brushstroke and unity.
They are jewels in subtlety.
The composition is invariably balanced and mostly dynamic, the effect often surprising with flaming trees as if set on fire by this most scorching of summers.
The whole is a document of possibly the hottest summer on record.

I love the pine trees in a forest

Scenes which are treated loosely and very freely with lots of light suffusing the path and branches.
There are flecks of primary colour which are refreshing to the eye and mind.
All of his paintings are growing on you the longer you gaze.
In fact I could not study them for long enough because it got so late.
But many are in my mind’s eye still.

Words will never do these paintings justice.
They can only evoke the curiosity of the reader to go and look for him/her self.
You will be the richer for the experience and want to take at least one of those oils home.
If you are like me you will be torn between a great many of this unique vision of one man, Gordon Frickers.

Appraisal by AMB, graduate of Medway College of Art, seamstress, painter and a person with many other remarkable talents

I had hoped I’d be able to look at your paintings with you, so that we could talk about them.
As it has worked out, that is not to be, so I’m going to look at them again myself, and write down what occurs to me.

Firstly I have to say that I feel privileged to hold them.
They feel immensely precious, and I feel being with the originals rather overwhelming.

In some ways the series of three, of the same clump of trees in a breeze, are my favourites.
I love the texture and intensity of detail, and the lustre.
Particularly the pinks and reds in the bottom corner of the ‘green’ painting.
Although they’re not the first thing I see, they are so important.

Almost for the same reasons, I like what I think is an earlier, but similar painting, a small one with a sandy coloured ground between some textured trees, with purple mixed with the greens.
It is quite special.

Different but absolutely lovely, are the series including the landscape above your fireplace.
Your handling of the hilly landscape is lyrical, almost musical.
It makes me want to move my body, at least my hands.
Owes a lot to Cézanne I know, but there is movement of say, Derain there.
And an immense sense of depth.

That village scene framed above your bureau, with the clear blue sky, keeps drawing my eye.
I am becoming more and more obsessed by it.
The balance between the detail and the texture of the trees, and the crispness of the buildings…

I could go on and on, but time and my train press.
Too much for such a short time.

I overlooked to mention the beach painting which I had felt very drawn to.
I mean the one painted a while ago, of empty flat sands with perhaps ?? A small flotilla right in the hazy centre distance.
It is a painting both peaceful and stimulating at the same time.

And the small one, a forest scene, with an irregular margin you said had been created to use up the paint left over at the end of the day.
Well!! What a remarkable lack of waste of resources.
It is outstanding.

Have to go
Thank you for looking after me so well,
AMB